Donald Allen Wexler (January 23, 1926 – June 26, 2015) was an influential Mid-Century modern architect whose work is predominantly in the Palm Springs, California area. He is known for having pioneered the use of steel in residential design.

Although Donald Wexler was raised and educated in Minneapolis, he probably wouldn't want you to know that. It was at the behest of bon vivant architectural socialite William Cody that Wexler begrudgingly decamped to the Coachella Valley for a six-month assignment building the Tamarisk Country Club. Before long, Wexler was smitten. In his eyes, the long, inhospitable stretches of California's desert were an irresistible challenge. His architecture—low-hanging eaves, folded-steel roofs, experiments in prefabrication—emerged from the desert nonchalantly and organically. Before his death at the age of 89, Wexler was amused by his idolization. He was astonished when real estate advertorials bandied about "Wexler-like" as an adjective, refusing to brag when his ad-hoc architectural innovations became a de rigueur building style, and whenever possible, attributed his success to others. 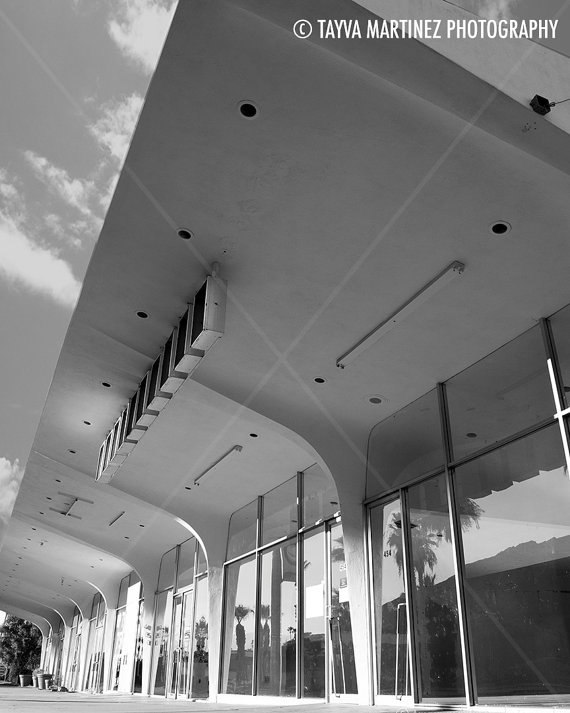 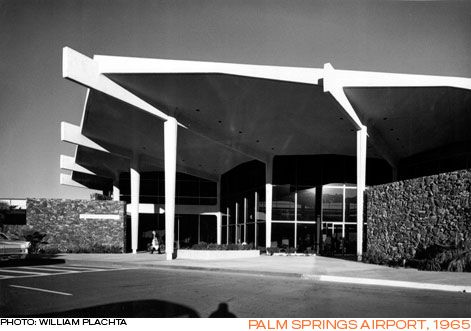 Wexler was born in Sioux Falls, South Dakota, and raised in Minneapolis, Minnesota. He graduated from the University of Minnesota in 1950, and worked for Richard Neutra. After his short stint in Nuetra's Los Angeles office, Wexler found the Coachella Valley refreshingly empty. In a recent interview he recalled that, "It was a very small community when I came here, maybe 7,000 people. It closed down for four months in the summer — there was nothing here. There were no doctors, no dentists. The first year there was one restaurant open." Unsurprisingly, that first year wasn't easy: The celebrity clientele was demanding, the climate harsh, and first year earnings were a meager $5,500.

He moved to Palm Springs in 1952, forming a successful partnership with Richard Harrison - a draftsman in William Cody’s firm - to carry out residential work that included the Lilliana Gardens Glass House (1954), the post-and-beam Leff-Florsheim House (1957), and Royal Hawaiian Estates (1960), 40 Polynesian-inspired co-op units which became, in 2010, the city’s first residential historic district. The firm of Wexler and Harrison continued until 1961. Ultimately Wexler practiced his craft in the Coachella Valley for nearly six decades, developing an architecture that is acutely sensitive to the extremes of the desert climate. 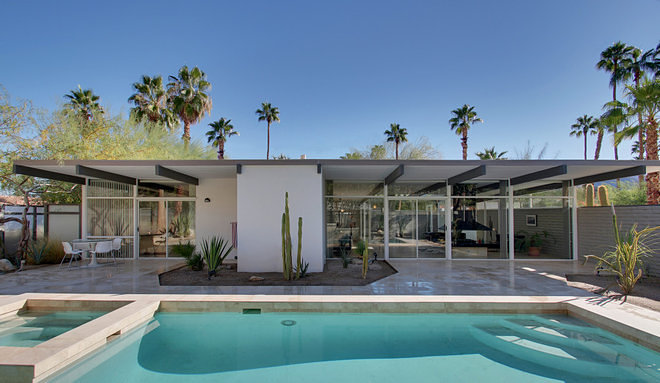 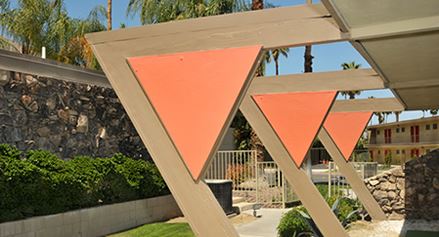 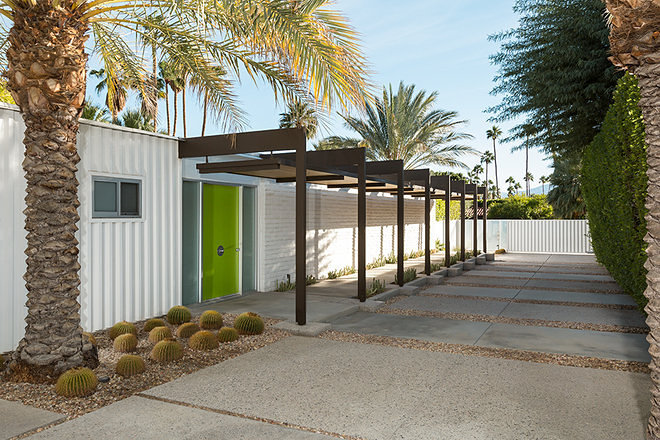 In 1960, structural engineer Bernard Perlin approached Wexler and Harrison with a proposition: design 38 flat-roofed all-steel homes at the periphery of Palm Springs for developers George and Robert Alexander. Perlin recalls, "I came by with as big a sample of a wall system as I could carry." Wexler, who up until this point had been toiling in architectural odd-jobs, said yes. A laundry-list of midcentury greats—Raphael Soriano, Charles and Ray Eames, Craig Ellwood, Pierre Koenig, and A. Quincy Jones—had already tried, and failed, to harness steel's potential for mass-production. 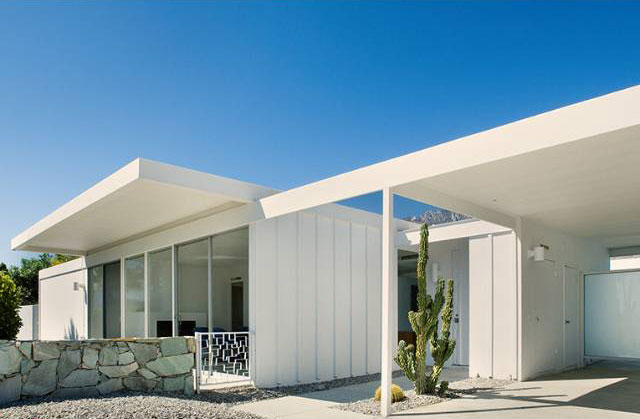 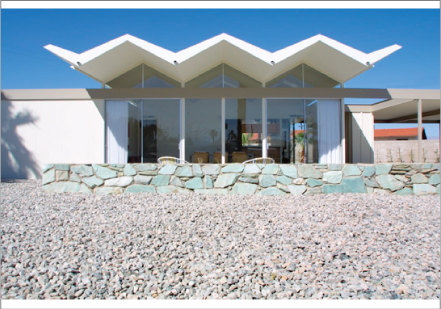 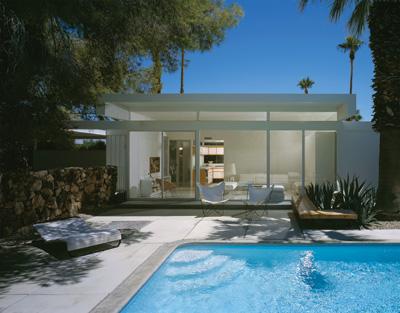 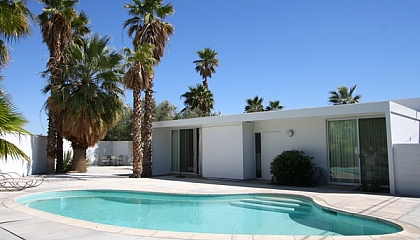 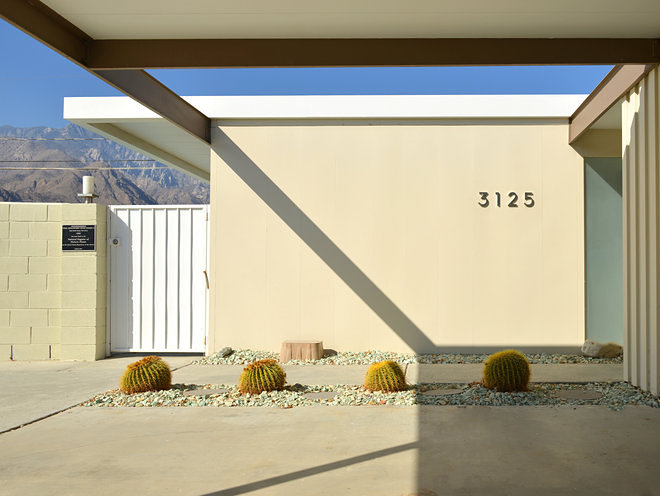 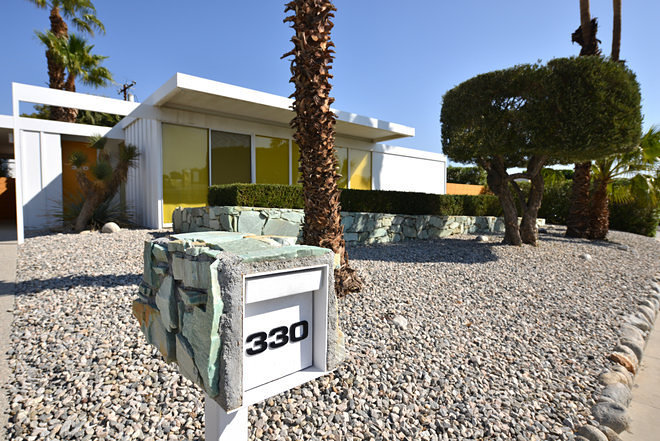 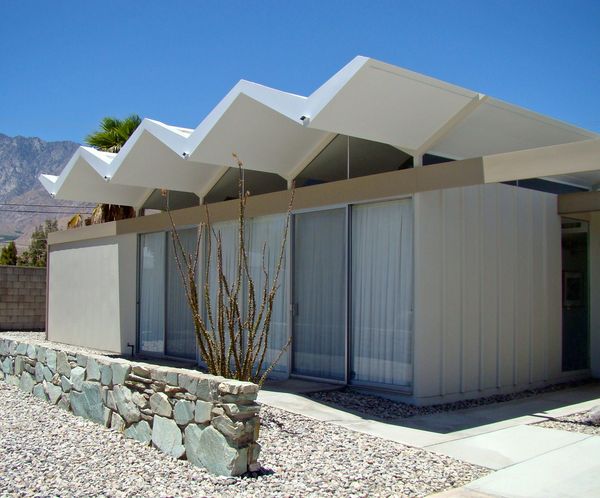 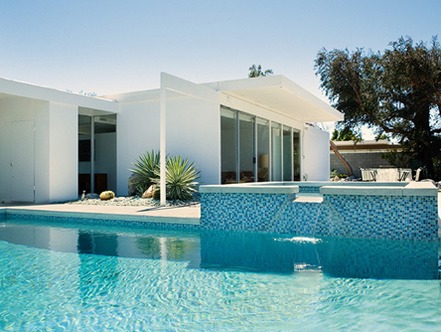 Wexler, though, was different. With the interested involvement of Calcor - a maker of prefabricated steel panels used primarily in public schools - as well U.S. Steel and Bethlehem Steel, which wanted to expand into the residential market, Wexler's designs made steel the entire structure. Wexler's houses—easily replicable, slim, and gorgeously functional—were an obvious antidote to what ailed postwar housing. Even today, the seven Alexander homes possess a cult-like following with Palm Springs modernism devotees. Pierre Koenig, a lifelong collaborator of Wexler, recalls in a recent interview, "Steel is not something you can take up and put down." Later Wexler added, "The seven steel houses, they'll never come down," he says."Someone will have to bulldoze them or they'll be there forever."

Wexler's houses' framing, roofs and exterior siding are typically steel, with drywall interior siding. While he chose to keep his office small and limited his practice to the desert community, Wexler ultimately went on to produce a body of work including houses, schools, hotels, banks and the Palm Springs International Airport.

“The center of the main terminal is almost a temple of glass that frames the mountain,” said Michael Stern, who has written widely on Palm Springs modernism. “When you arrive at that airport, you have arrived. It was Donald Wexler’s love letter to Palm Springs.”

Throughout his career, Donald Wexler remained firm on one point; he refused labels. The late architect famously said, "We didn't even think of it as 'Modern' in terms of architecture for the desert. We did it to live with the environment, a matter of balancing orientation and views." Adamantly against being described as Midcentury Modern or of the International Style, Donald Wexler preferred to let his work speak for itself.

“Wexler worked from an existing Desert Modern vocabulary — indoor-outdoor spaces, walls of glass, a focus on mountain views, all very spare and minimal — and applied it to all sorts of buildings over the years,” said Peter Moruzzi, founder of the Palm Springs Modern Committee, a preservationist group. “He had a profound influence not just on Palm Springs, but on the entire Coachella Valley.” 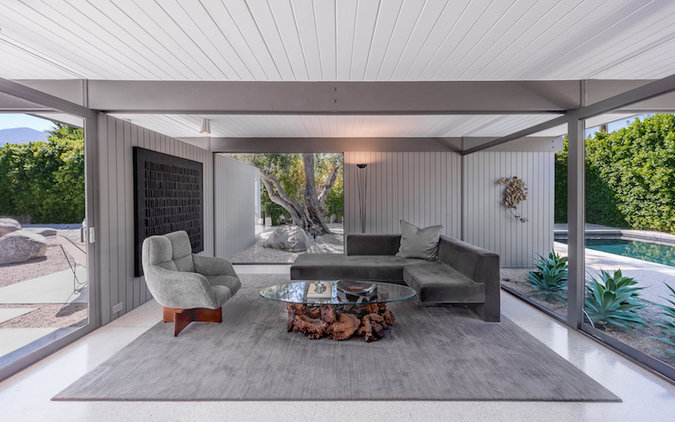 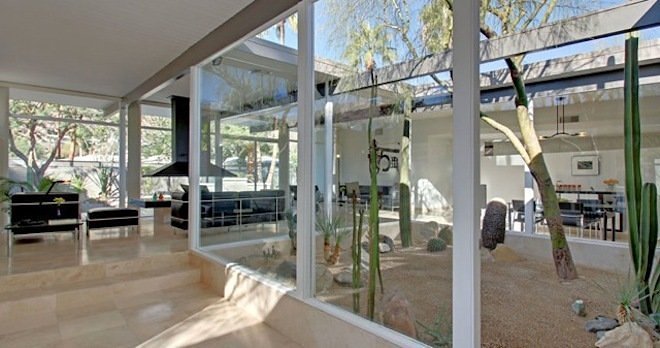 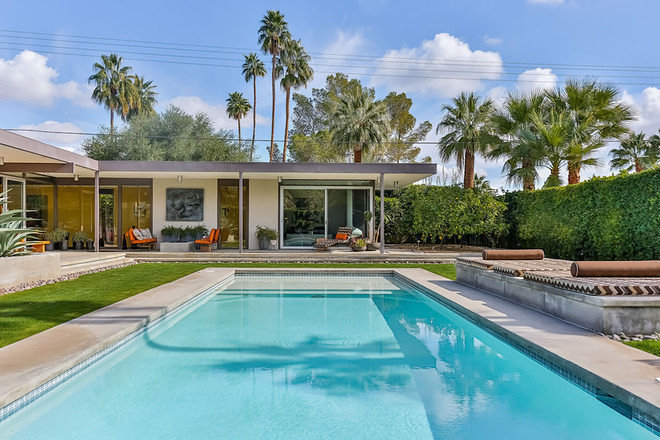 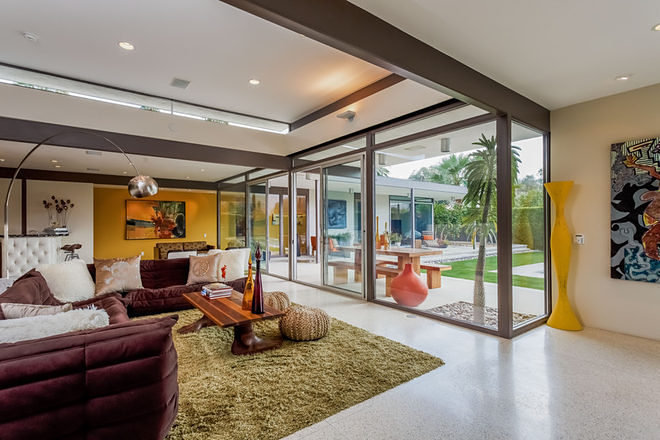 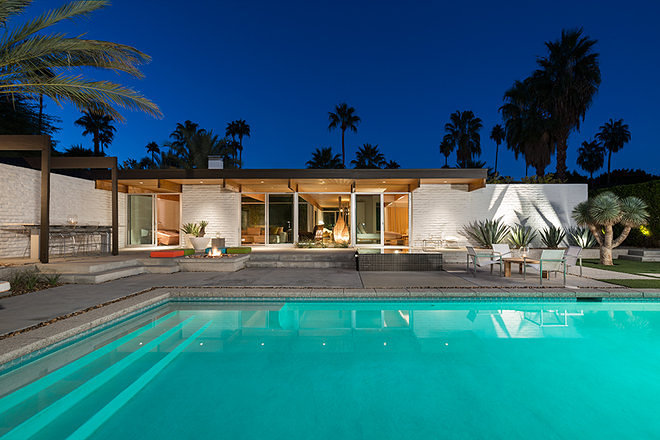 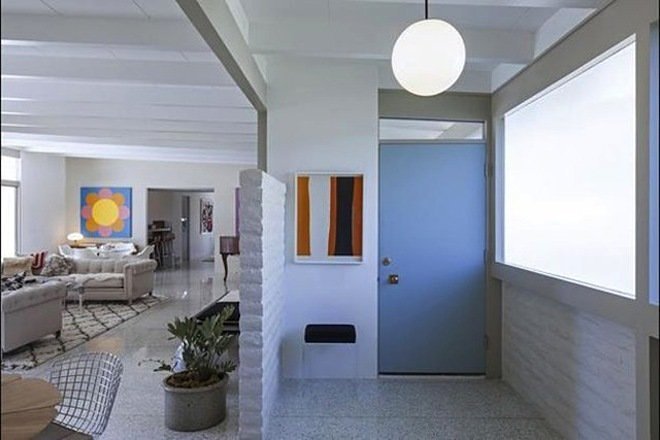 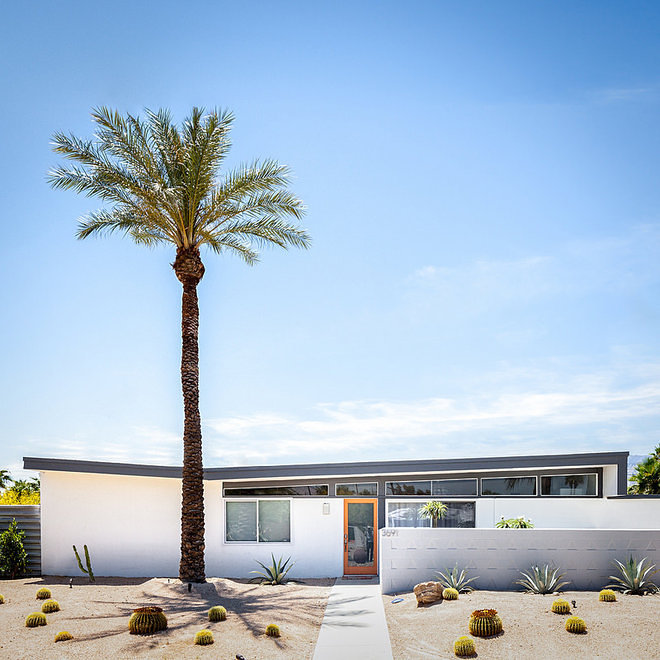 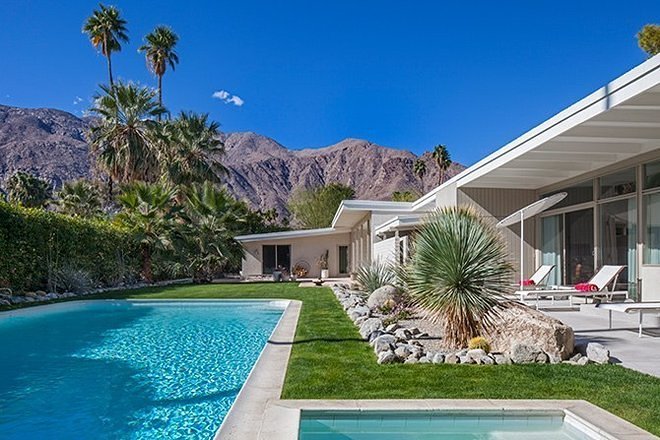 A long-time resident of Palm Springs, Wexler's long roster of functional, beautiful, and influential projects includes the Palm Springs Airport Terminal, the Merrill Lynch Building, the Desert Water Agency Operations Center, the Ramon Drug Building (currently slated for demolition), and 16 public schools throughout the area. Wexler and Harrison also collaborated, with William Cody, on the original 1963 Spa Resort and Hotel - including its elegant, iconic and world-famous entry colonnade - which was demolished, amid much protest, in September 2014.

Donald Wexler received a Golden Palm Star on the Palm Springs Walk of Stars, dedicated to him in 2008. Archives of his work are kept at the Cal Poly Pomona College of Environmental Design. In 2011, developer Marnie McBryde presented plans to build up to 50 Wexler-designed houses, which are adaptions of the 1964 Palm Springs house he designed for Dinah Shore, throughout The Hamptons. In 2014, actor Leonardo DiCaprio purchased the original Dinah Shore residence in the Old Las Palmas neighborhood of Palm Springs. 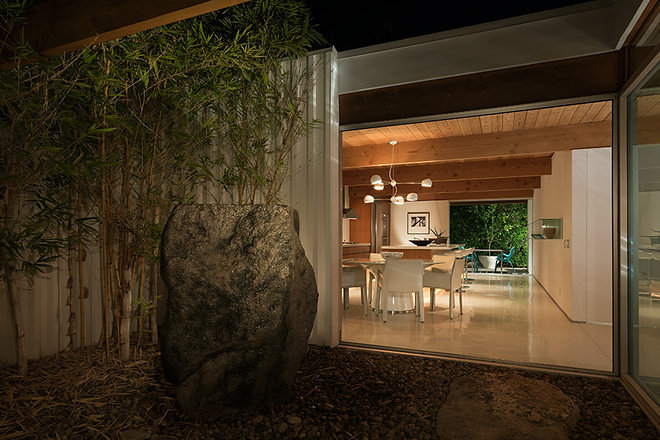 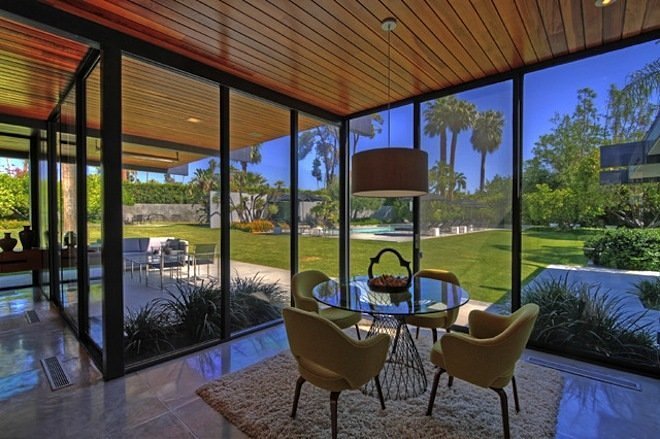 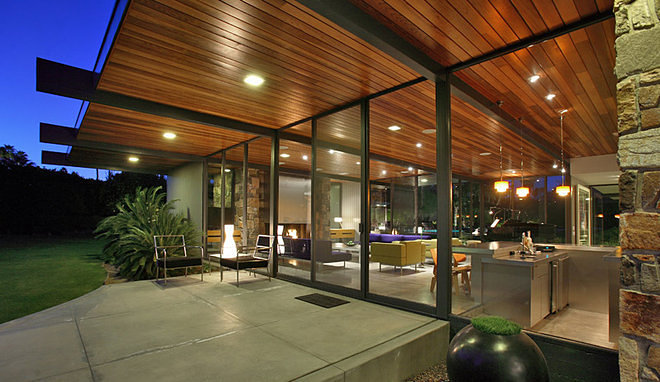