William Krisel (1924 - ) wants to clear up a misconception. "Whenever people see a house with a butterfly roof," says the architect, "They think that I designed it." But, he adds, "It's not true."

It's an understandable misperception in Palm Springs, where the roof with two wings evokes one of the city's best-known home designs - from the Twin Palms tract, which Krisel and then-partner Dan Palmer designed in the late 1950s. Eventually, Palmer and Krisel created nearly 2,000 houses in a succession of subdivisions of the area popularly known as the Alexander tract, described by historian Alan Hess as the largest Modernist housing subdivision in the United States. The stylish tract houses, which started at $19,500 in 1957, now fetch up to $1.3 million. 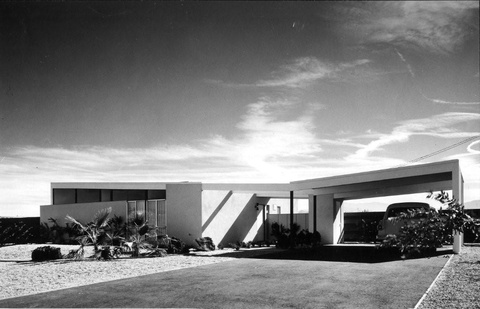 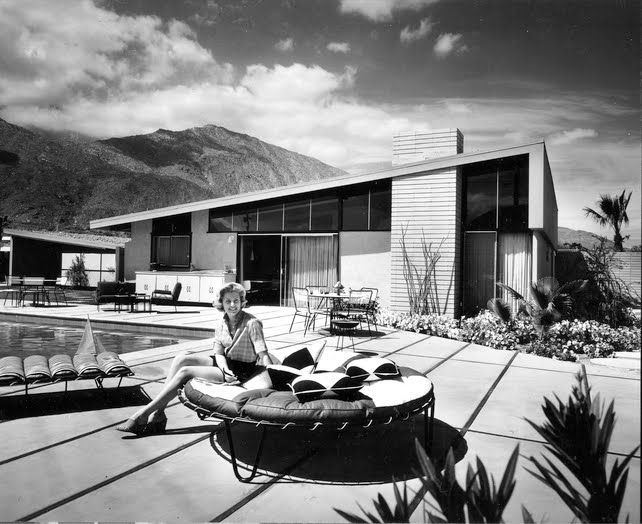 The pragmatic architect has a romantic biography: He was born in China in 1924, the son of a career diplomat, and learned Mandarin and the local Shanghai dialect. When the Japanese invaded China in 1937, the family relocated to Beverly Hills. Krisel entered the architecture program at University of Southern California. When World War II started, he enlisted in the Army Reserve and became one of Gen. Joseph Stilwell’s Chinese interpreters. After the war, he finished his studies at USC in 1949, and then entered into partnership with Palmer.

Dan Saxon Palmer (1920-2007) was an architect who, along with William Krisel, designed Modernist tract homes that provided the building blocks for southern California's suburban boom in the 1950s.

In its earliest form, Modernism stood for building in a practical, affordable way on a mass scale for ordinary people whose lives would be improved by good design. Beginning in 1950, Palmer and Krisel designed contemporary houses with post-and-beam construction, open floor plans in which the living room, dining room, and kitchen flow together, lots of glass, and clean, simple lines inside and out.

The work of Palmer and Krisel over the next decade reflected widespread interest in making home ownership both accessible and enjoyable. Their single-family tract houses were characterized by unique siting and landscaping, minimal ornamentation, innovative butterfly roofs, and large glass windows, expanding the design philosophy of their peers, including John Entenza and the Case Study House program, to meet the needs of the growing middle class. Their homes express a dedication to combining standardized layouts with visually interesting exteriors and landscapes, a distinct component of the firm’s designs.

In 1952, Palmer and Krisel won a commission for their first major housing tract, Corbin Palms, in the western San Fernando Valley. This former agricultural expanse was quickly being transformed into a sprawling bedroom community by an influx of World War II veterans, and other transplants, lured by good jobs in the aerospace and entertainment industries, low-cost housing, and a sunny climate.

"Palmer and Krisel took on one of the great problems of Modernism, which was to create good, decent housing that was affordable for the masses," said Alan Hess, an architectural historian who has written several books on postwar architecture, including "Ranch House", "Palm Springs Weekend", and "Googie". "Palmer and Krisel did it, and on a large scale, and in keeping with the inherent qualities of Modernism..."

"Other architects would not deal with the realities of budgets, materials, clients demands, or the financing that was involved in the nitty gritty of real-world housing development." 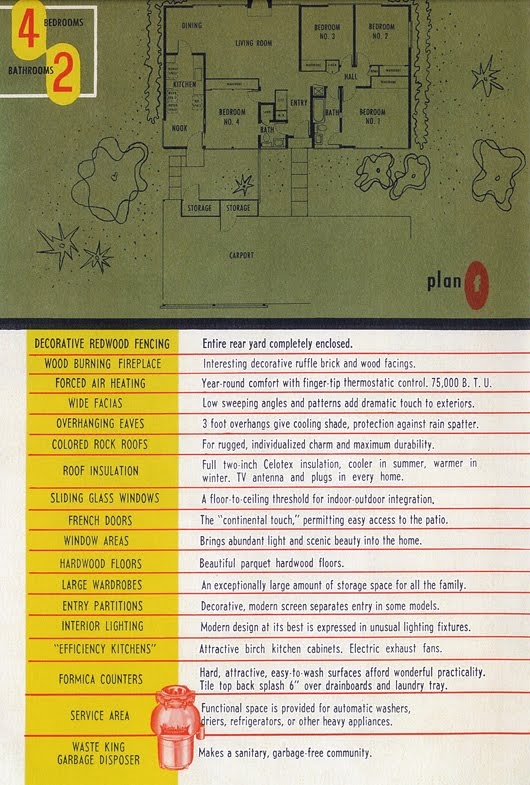 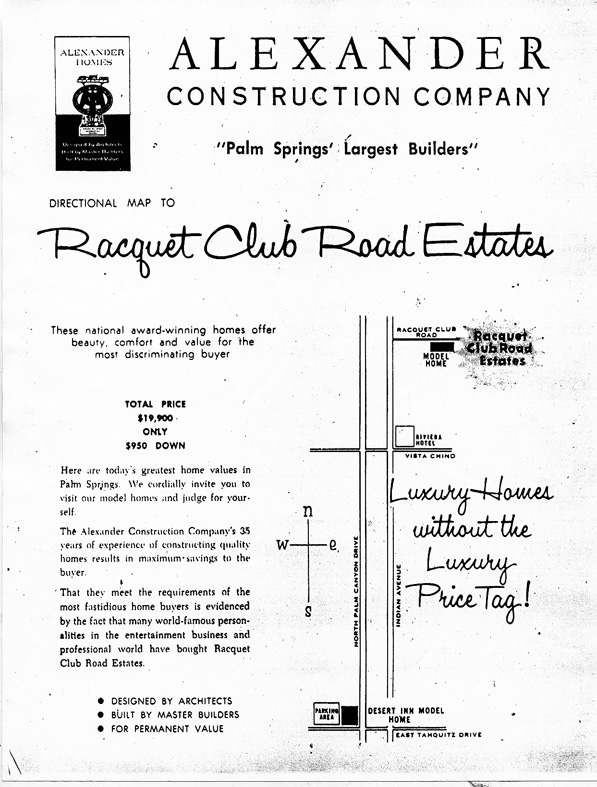 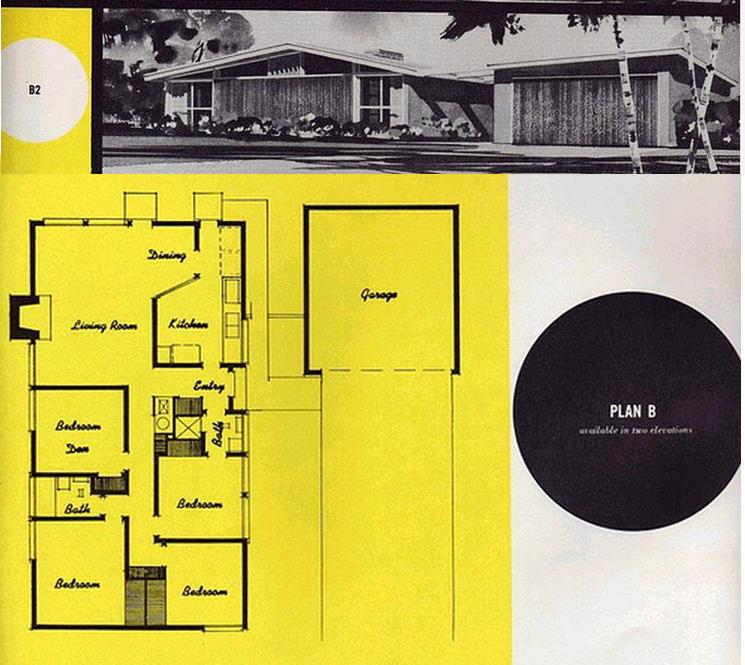 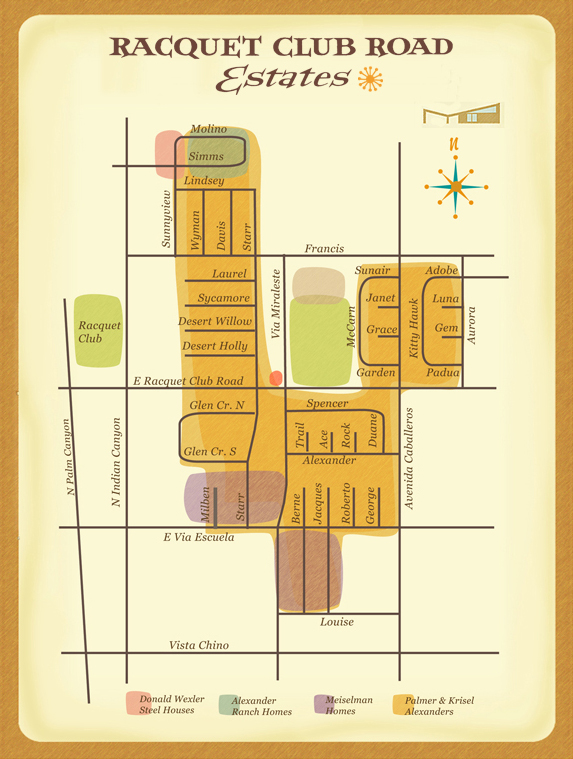 Corbin Palms was followed by other San Fernando Valley developments with stately names, including Devonshire Woods and Parkwood Estates. To the east was the Valwood Estates neighborhood in Pomona, and farther south were Midland Meadows in Fullerton, and Gilbert Grove Estates in Anaheim.

In 1954, the Alexander family - father-and-son builders George and Robert Alexander - set their prospects on recreational development in the Coachella Valley region around Palm Springs, and contracted Palmer and Krisel to build a resort, ultimately named the Ocotillo Lodge. 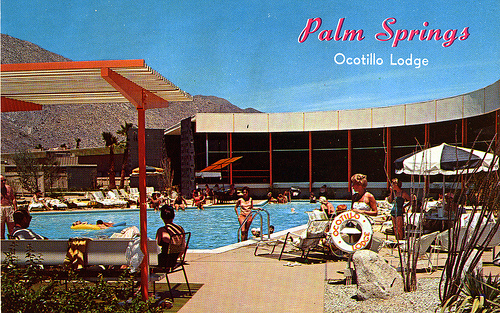 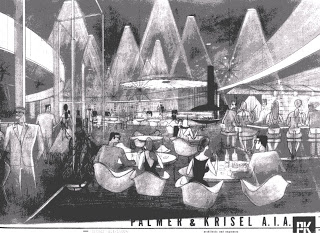 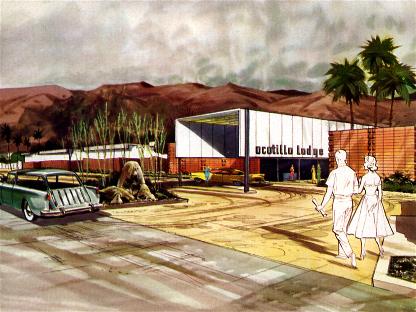 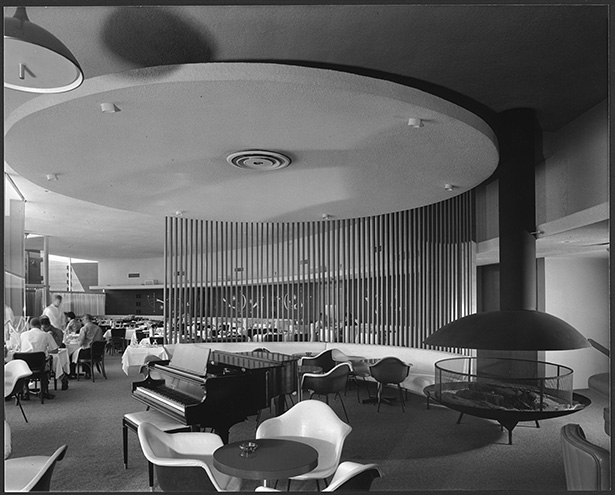 Ocotillo was finished in 1957, with nearby tract homes making second-home ownership outside of Los Angeles more feasible to the region's middle class.

Some of these dwelling include the homes in Twin Palms Estates, Racquet Club Estates, Sunmor Estates, and Vista Las Palmas tracts, in Palm Springs, and the Sandpiper Condominiums, in Palm Desert, among others, and were recognizable for their unique landscaping, block walls of concrete, swimming pools, and expansive views of the desert.

For the Twin Palms houses, Palmer and Krisel chose a square floor plan, because it was the most economical. The units were only 1,200 to 1,600 square feet in size, but their skill in planning made the houses comfortable to live in; every unit had an open patio separating the house from the garage. Alexander and his wife, Helene, lived in a larger version of the butterfly-roof design until their untimely deaths in an aviation accident in 1965.

More than 20,000 houses designed by Palmer and Krisel would be built by George Alexander, Harlan Lee, and other developers in southern California, Arizona, Nevada, Texas, and Florida by the end of the 1950s.

Krisel is a developer’s architect — and proud of it. Rather than designing individual homes, he has worked for a succession of production builders since the early 1920s. “Develop a relationship with a builder, do good work, and you won’t need to go ringing doorbells to get new clients,” says Krisel, a man with strong opinions who still speaks with the authority of someone who long ago operated one of the nation’s largest home-design practices. In the 1950s, it wasn’t enough for an architect to design well, he says. “You had to convince builders they would make money.”

In 1957, Palmer and Krisel were working for seven of the ten largest home builders in the counrty, according to Architectural Forum magazine. In the early 1960s, their offices employed 60 people, and they declined any commission for fewer than 50 houses.

Their relationship with developer Robert Alexander was foundational. "I wanted to learn how a builder thinks, and I told him how an architect thinks," Krisel says. "We put those together and went to work." 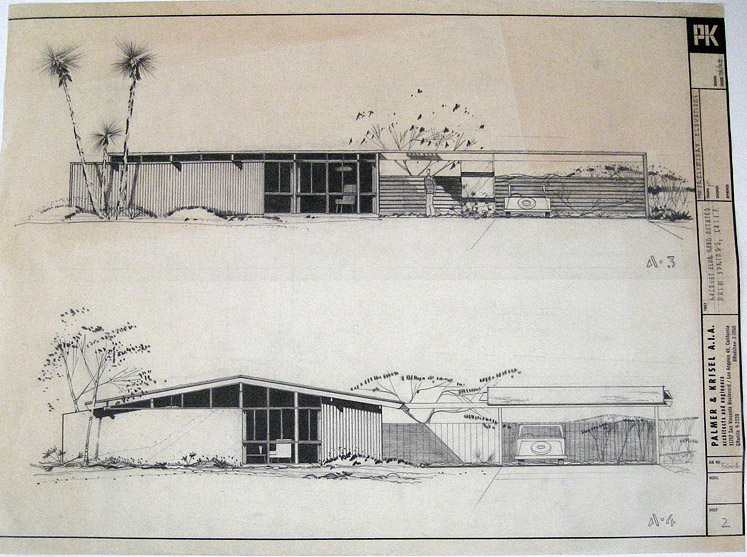 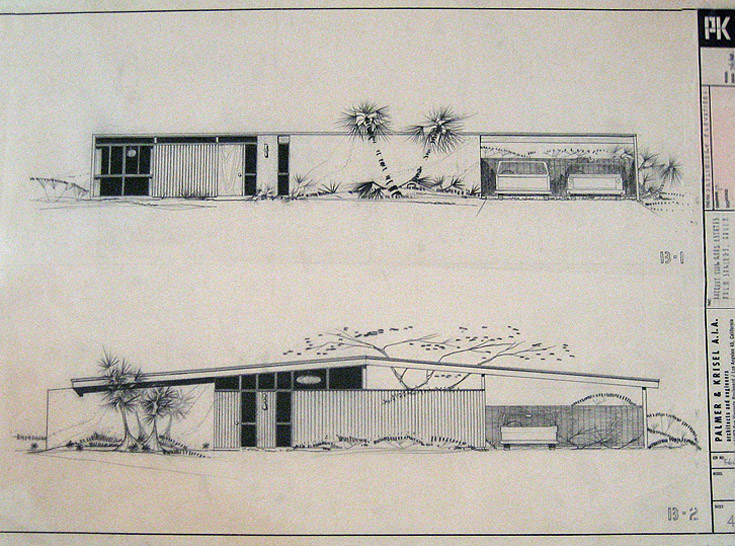 Palmer was born in 1920 in Budapest, Hungary. Two years later he moved with his parents to New York, where his father operated a Hungarian import business, and his mother worked as a dress designer.

After earning a Bachelor's Degree in Architecture from New York University in 1942, Palmer served in the Army Corps of Engineers during World War II as a mapmaker, draftsman, and photographer, in England and France.

He worked for architects Morris Lapidus in New York and Victor Gruen in Los Angeles, and in 1950 formed his Los Angeles-based partnership with William Krisel, who had also worked in Gruen's office.

Palmer's formal business relationship with William Krisel ended in 1964, although the split was amicable, and they remained good friends. At first, Palmer continued to design tract homes and also commercial developments, including the City National Bank building (1968) on Pershing Square in downtown Los Angeles.

Palmer then went on to manage residential and commercial designs for projects in Saudi Arabia. In the early 1980s, Palmer managed commercial and residential design for a multibillion-dollar development project in Yanbu, Saudi Arabia. There, U.S. and Saudi contractors transformed an ancient seaport into a modern industrial city with a crude oil pipeline terminus on the Red Sea.

Like Richard Neutra a generation before him, Krisel downplays the importance of style as an end in itself, emphasizing buildability and livability. Despite the fame of his butterfly roofs, "I don't believe in style," he says with characteristic bluntness. Nor does he believe in updating his designs to keep pace with fashion. He depolores the attention-seeking work of people he calls "the star-chitects," whose work he believes will quickly become dated. Real architecture, Krisel says, "has nothing to do with time." 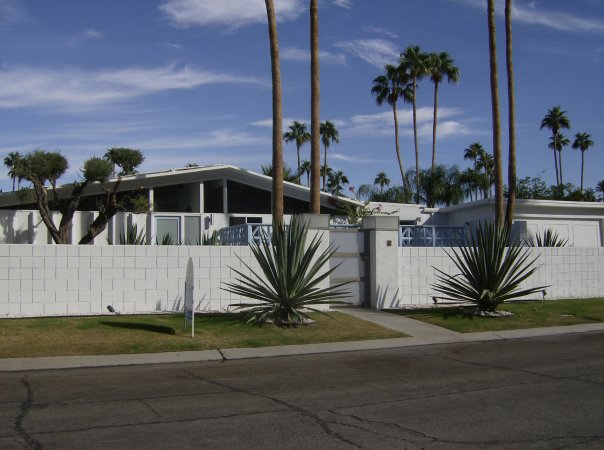 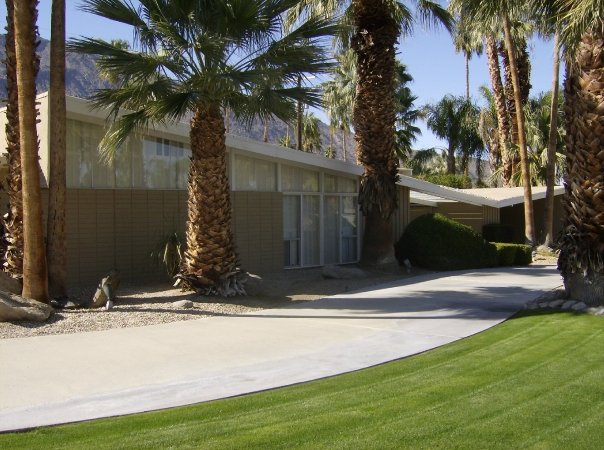 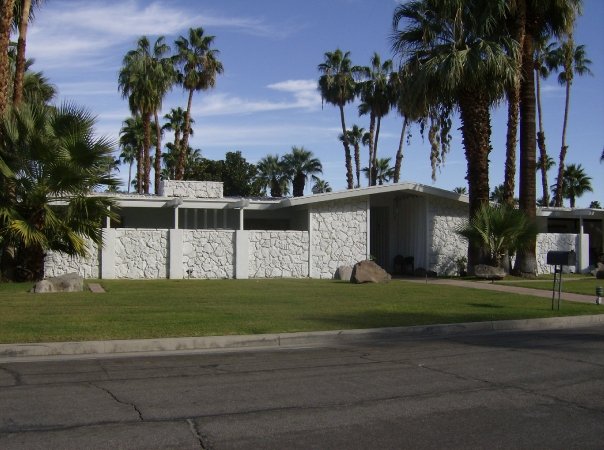 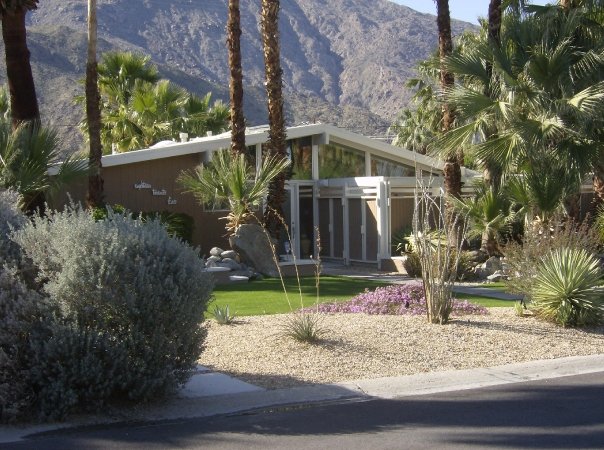 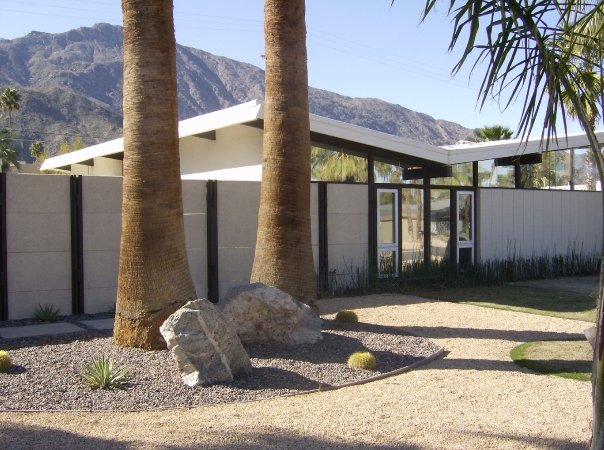 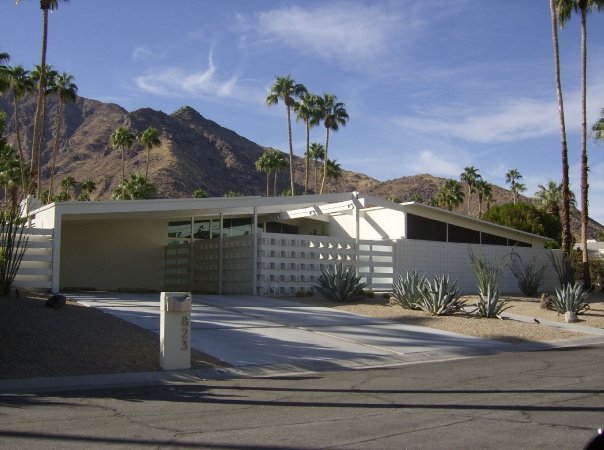 Although he has been retired for nearly 20 years, Krisel continues to receive telephone calls from owners of buildings he designed a half-century ago. He delights that he can remember the details of hundreds of different projects. “A young woman called me recently,” he says. “She said, ‘I am standing in the kitchen and the floor is warm. Does this house have radiant heat?’” No, replied Krisel: in that home model, the hot-water pipe runs directly beneath the kitchen, with the intent of warming the feet of housewives on chilly mornings. “That was 50 years ago, before radiant heat; but I knew how to do things like that,” he says.

Krisel gave a striking demonstration of his belief in the durability of his design language when he completed five new houses based on the original Alexander tract designs. "We updated them for code and earthquake standards," he says. "Otherwise, they're exactly like the originals."

Krisel also dismisses the idea that artistic development means changing his approach. "It's my language," he says of his architecture. "I spoke English before, and I still speak English."

"When you have the correct idea," he adds, "There's no need to change it."

For more information about local architecture and architects, builders and developers, design and real estate - both the history in our area, and our recent and current real estate market, please contact me: 760-641-9416, daleswanson@bhhscaproperties.com