A fourth generation Coachella Valley resident, architect Lance O’Donnell understands the California desert from places too deep in his soul to excavate.

He also lived among and absorbed the inspired and innovative architecture created over the last half century by some of the world’s most gifted and notable architects: Richard Neutra, Albert Frey, E. Stewart Williams, William Cody, and Don Wexler, with whom O’Donnell began an almost decade long collaboration in 2002.

After receiving his Bachelor of Architecture degree, with honors, from Cal Poly San Luis Obispo in 1991 and his Master degree in architecture from UCLA in 1994, O’Donnell returned home to the desert to, in a sense, resume the work of the past masters.

“Palm Springs has a heritage and history of genuine and authentic architecture,” said O’Donnell. “That generation of progressive thinking influenced an entire movement of architecture. The desert was a place for experimentation. Varied people and lifestyles drove the thinking; architects could take a more experimental and progressive approach to living. It was not about ‘having to have so many bedrooms and bathrooms.'”

Different housing configurations — from Cody’s pre-condo era connected cottages at Eldorado Country Club to Wexler’s cluster of attached homes at Sagewood, with lots of open space around them — the desert lifestyle has always engendered a sense of community, said O’Donnell. “You shared the yard and the pool; you wanted to know your neighbor. It promoted a community sense, civic mindedness,” he said.

In 1993, O'Donnell co-established O'Donnell + Escalante Architects, in downtown Palm Springs, with Ana Maria Escalante, who was selected by the American Institute of Architects (AIA) as one of the top talents emerging in California, and was invited to lecture about her work in the 2001 AIA Monterey Conference. In 2002, Escalante was invited to lecture at the 7th International Congress of Architecture in Monterrey, Mexico.

In 2006, O’Donnell established his current firm, o2 Architecture, which he says “engages the senses and intellect with a poetic connection to site and rigorous environmentally crafted modernism.” 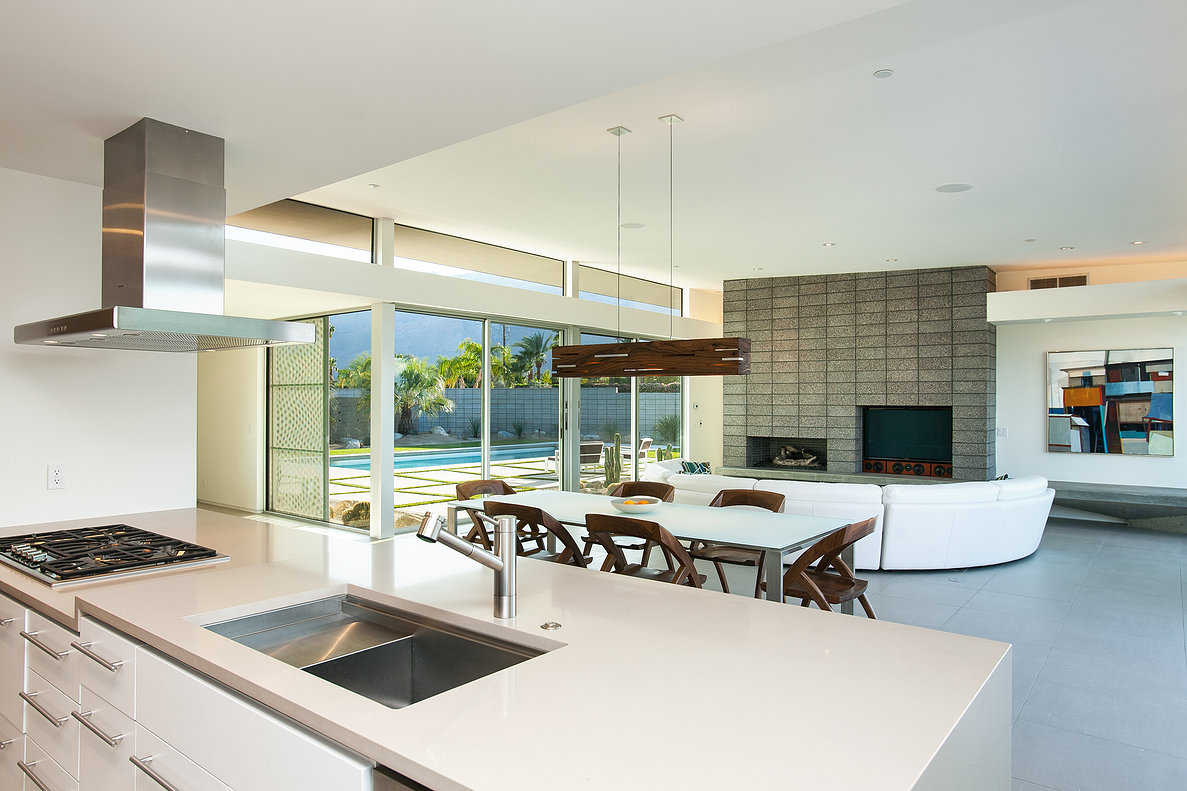 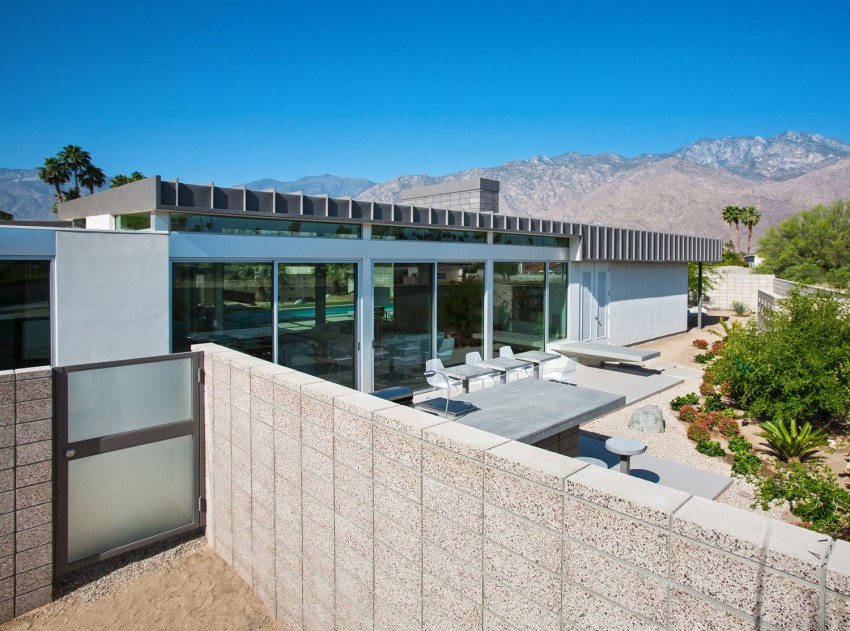 O'Donnell collaborated with Donald Wexler on his California modernist lifestyle project in the Hamptons, and completed an extensive remodel of Wexler’s former family home, awarded “Remodel of the Year” in 2009 from the Palm Springs Modernism Committee.

Current owner Daniel Giles, who purchased the home from yet another previous owner, wanted to renovate and maintain its modernist essence but expand and update some living areas. He asked Wexler to be a consultant, with O’Donnell as the remodel architect.

“It was not easy managing the project,” admitted O’Donnell. “Giles took some license by eliminating one bedroom and expanding another. In the end, though, when Wexler and his 3 sons recently toured the house, they agreed with and saw the significance of the expansion and remodel.” 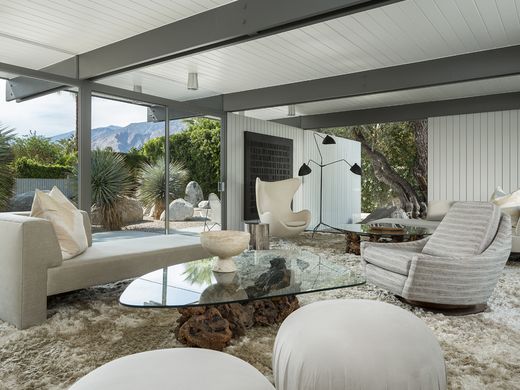 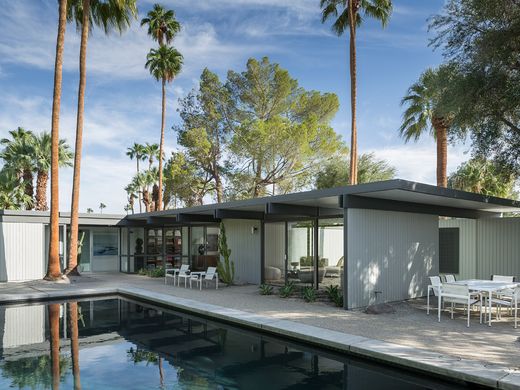 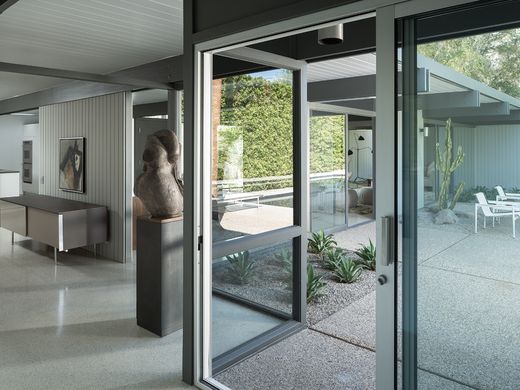 Remodeling a mid-century modern home is not always just about restoring to an original condition.

“Part of the challenge is that people tend to accumulate stuff over the years and this stuff has its own inertia so doesn’t easily go away” said O’Donnell. “And in a minimalist environment, there’s often not enough space to store it — whether it’s shelving or wall space or adding storage for seasonal things like clothes or holiday decorations.”

During the 70’s, 80’s and 90’s, many mid-century modern homes suffered “add-ons” such as enclosing covered patios, extra rooms and storage areas that obscured the architect’s original vision.

“In some cases, we’ve had to surgically remove almost one third of the square footage to get to a livable plan,” said O’Donnell.

Making homes energy efficient by today’s standards is another challenge.

“Back in the 50’s and 60s when electricity was cheap, you didn’t worry about running the AC all day and leaving the doors open,” he said. “There was lots of attention on indoor/outdoor living, but no plan for energy conservation. There was a understandable tendency for over-consumption.”

O’Donnell’s recent renovation of a mid-century modern in south Palm Desert included new air conditioning units and ducts, fully insulating the new roof and walls, and using dual pane windows throughout – including a massive glass wall—on the “cool” north side. He added functional space with a new master suite bedroom and bathroom, designed with its roof tilted in the opposite direction of the house’s existing roof line to celebrate the views and resulted in a butterfly roof profile.

For his own family home in Palm Springs’ Little Tuscany neighborhood, O’Donnell designed the house that taps natural cooling temperature patterns in summer and passive warming in winter through “timeless, low-tech solutions” like cross ventilation.“ By placing large operable windows on the north and south sides of the house, we can quickly cool the house in evenings, thus decreasing the need to air condition,” O’Donnell said in a Palm Springs Life Magazine story about his “Bionic House.”

A generous overhanging roof shades the floor to ceiling windows in summer, while the sun’s lower angles in winter warms its interior concrete floor which retains heat throughout the night. The LEED certified home with sub zero carbon footprint was completed in 2009. 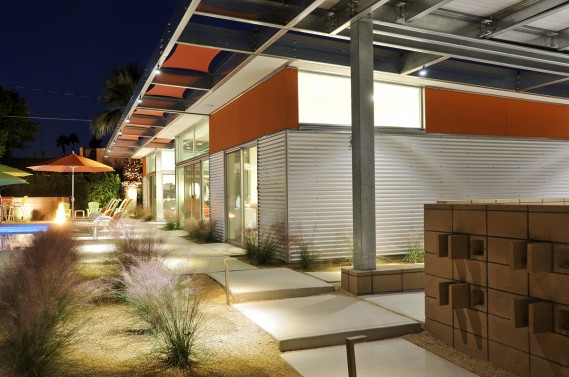 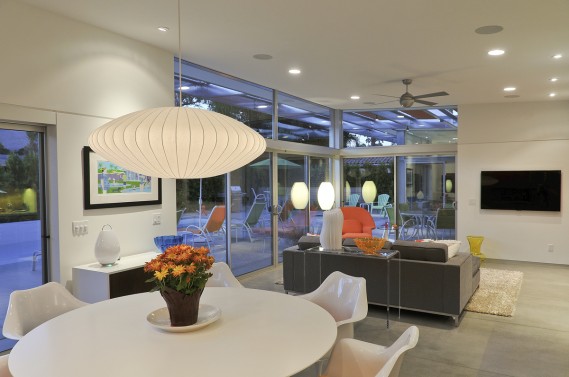 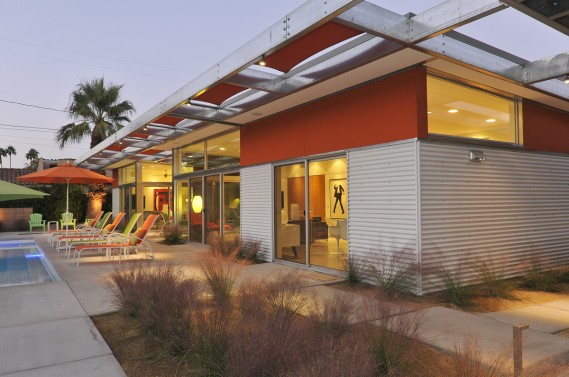 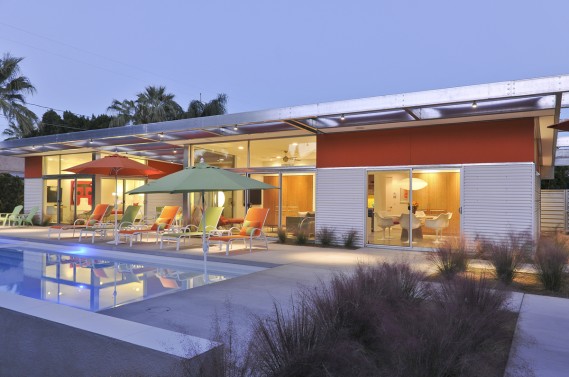 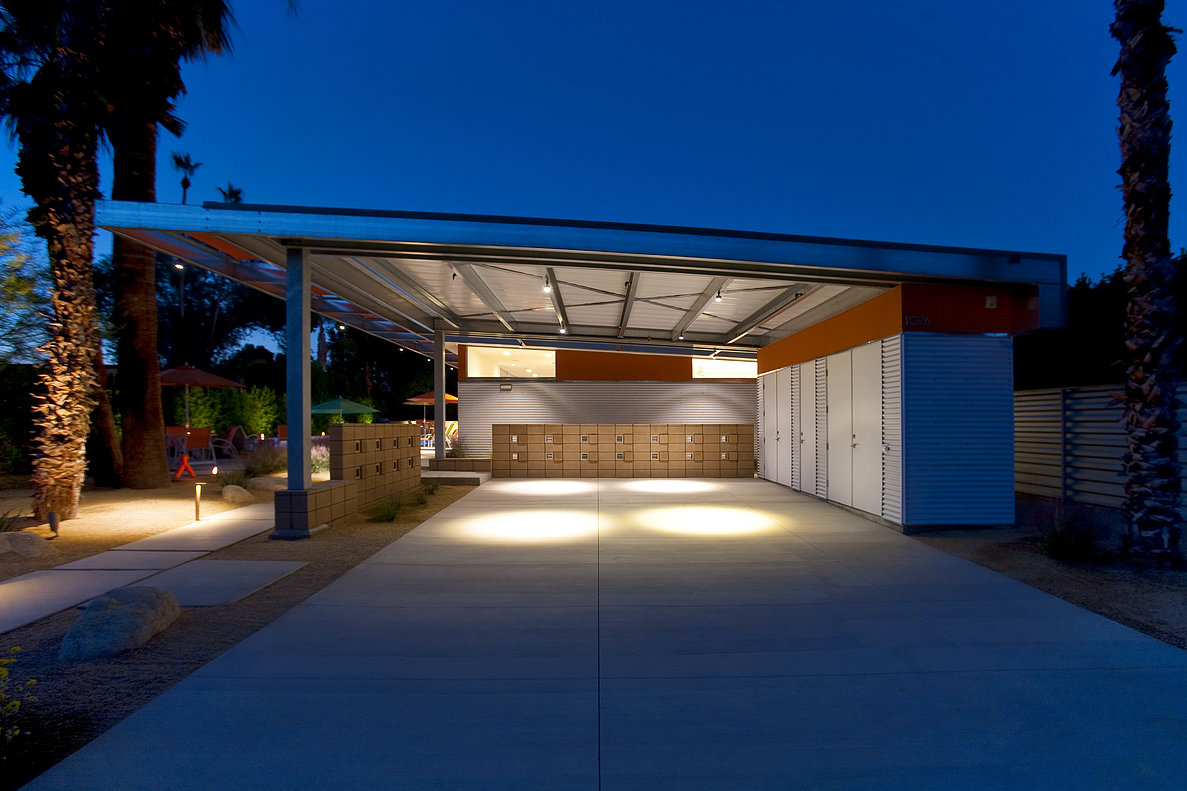 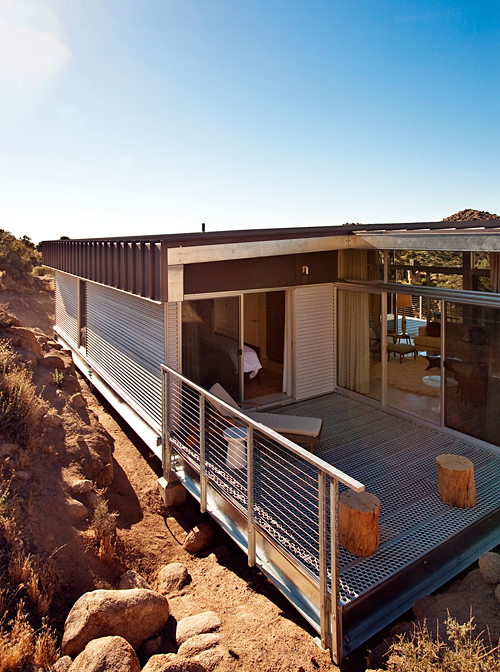 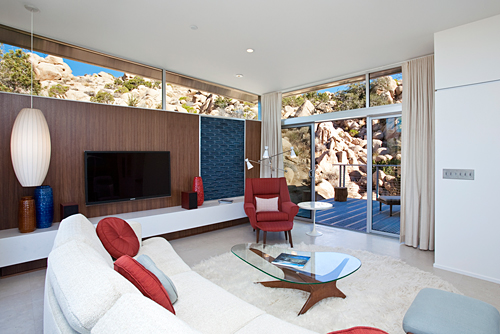 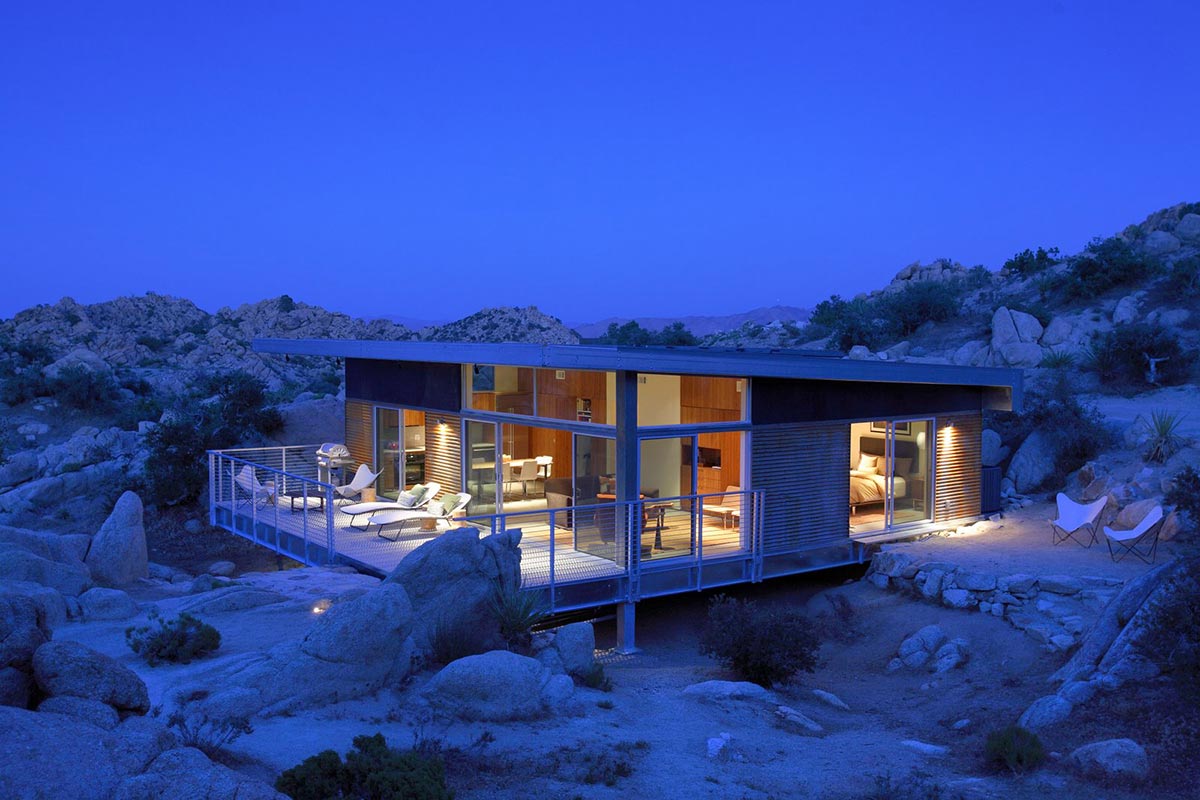 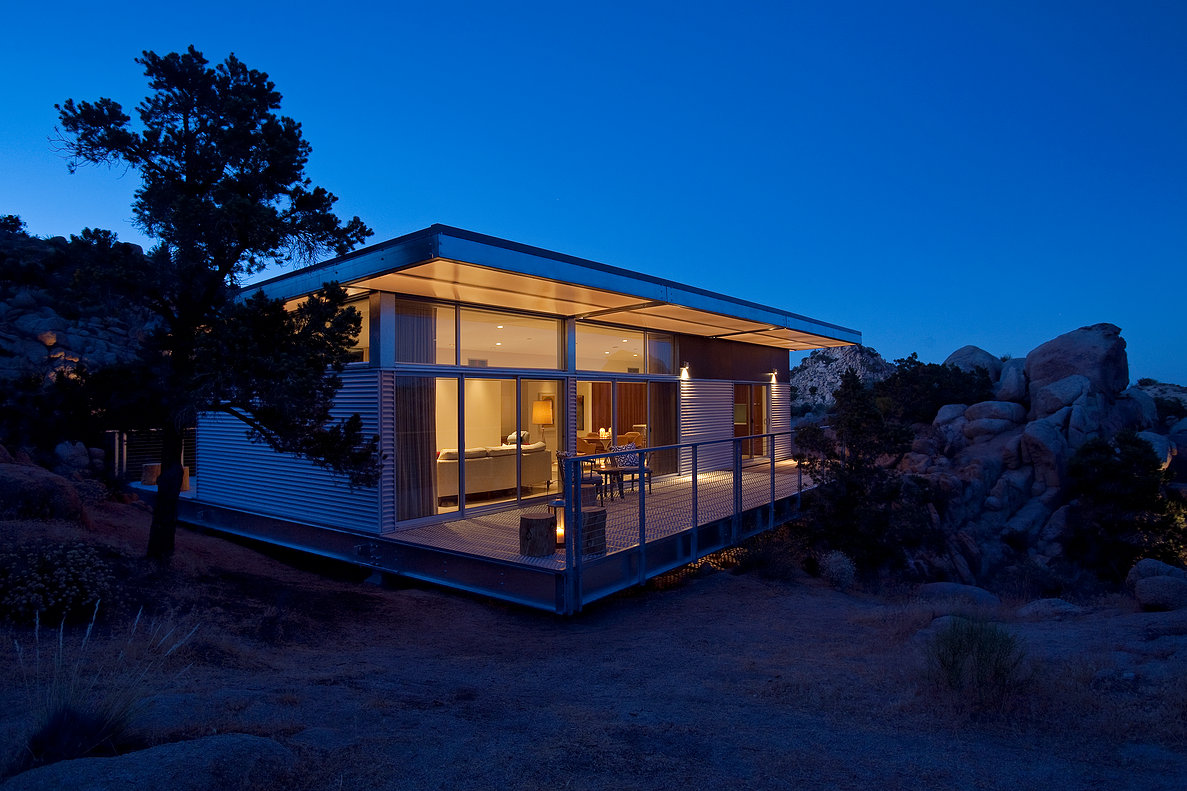 The up-and-coming architect has worked on more than a dozen Alexander home remodels, several by Cody and Wexler and his firm also designs many new mixed-use and civic projects. While some projects still remain on paper, one of his proudest achievements is the Tahquitz Canyon Visitor Center, on Agua Caliente tribal land.

The glass, steel and concrete building — its classic modernist form and large overhanging roof — stands out against the rugged mountainside at the entrance to an ancient Indian canyon where for centuries, native people gathered seed, hunted, planted and lived in harmony with the desert.“The paradox is while contrasting with the natural environment the building seamlessly harnesses the same natural forces the Cahuilla utilized for thousands of years.

”Working closely on mid-century building, has “driven home the sense that there is an underlying order to the building, there is a harmony to the parts,” said O’Donnell.

And there is clearly poetic harmony between nature and human purpose in O’Donnell’s designs.