Chaddick's work in zoning began in Chicago in the late 1940s and early 1950s. In 1948, then-Mayor Martin H. Kennelly tasked Chaddick to settle disagreements and draw up a new ordinance for where to place truck terminals in the city. After this engagement went favorably, Chaddick was appointed to positions in charge of zoning. Chaddick was Chicago's Director of Zoning under Mayor Kennelly, and then Mayor Richard J. Daley. In this position, Chaddick produced the city's first Comprehensive Zoning Ordinance in 1957. This was seen as a major step toward modernization, and it encouraged retail and high-rise development. Over the following decade, Chaddick and fellow city zoning officials refined and revised the laws.

In 1961, Harry Chaddick toured the Palm Springs Tennis Club property with Frank Bogert, who was then Club Manager for owner Pearl McManus.. Chaddick had became enamored of the Palm Springs area. He eventually bought a house in Palm Springs for his wife, Elaine.

Harry was impressed with the club and spoke with Pearl McManus about selling. Nothing came of it, so he and Elaine returned to Chicago. Weeks later a representative of Pearl's made an offer to sell. Pearl had taken a liking to Harry and knew he would treat her beloved club with dignity and respect. Harry closed the deal over the phone. He later recalled, "I didn't even know what size the property was or even what constituted 'The Club'. It was just beautiful and I wanted it".

Harry's next hurdle was closing escrow. Every time Pearl needed to sign papers, she would disappear. She would not show for appointments. In any event, escrow eventually closed and a new era at the Palm Springs Tennis Club began.

When Harry took over there were four courts, a clubhouse, a restaurant, ten bungalows and a pool across the street. He added more bungalows and two courts soon after. The vacant property south of the club was purchased by Harry and developed into a private condominium project along with three more courts. As buyers moved in they invariably joined the club and could be seen daily on the courts.

Pearl passed away and Harry began to envIsIon an exquisite hotel against the mountain. Word reached Harry that Pearl's now vacant home was being considered for historical restoration. Harry explained, "I knew if the house was designated for historical purposes, I would never be allowed to construct my hotel. I called a demolition guy that I knew and paid him $5,000 to demolish the house".

In 1970, Chaddick purchased the San Jacinto Country Club, near the northwest corner of Vista Chino and Gene Autry Trail, in Palm Springs, and changed the name to the Whitewater Country Club. He then began an extensive program of several million dollars' worth of expansion and improvements, including condominium development.

In the spring of 1976, with the beginning of another round of renovation and expansion, the name was changed again, to the Palm Springs Country Club. The new round of improvements included a recreation building complex that included facilities for swimming, billiards, an exercise room, and four new tennis courts.

"We now have a recreational facility that in luxury and design compares favorably with many of the more prestigious country clubs in the entire desert resort area," Chaddick announced at the time. "It probably is one of my most satisfying achievements." 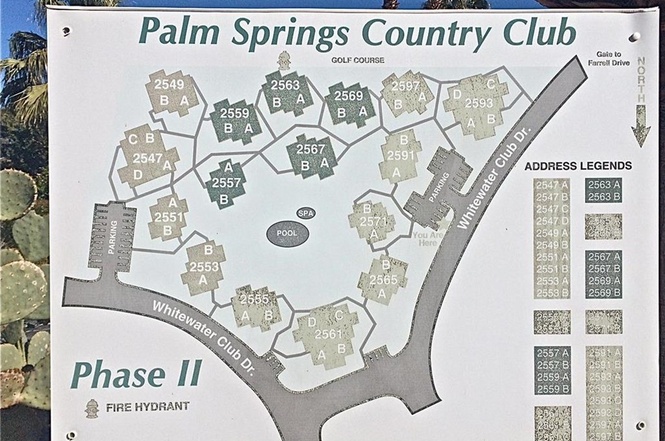 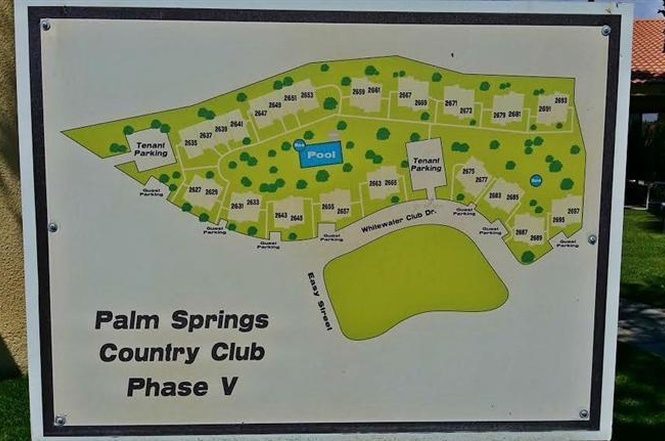 In early June 1977, a groundbreaking ceremony was held for a third phase of condominium development at Palm Springs Country Club - 42 more condominiums, bringing the community total to 140 homes. Eventually, the project would total 232 condominiums.

Concurrent with the announcement in the Desert Sun on June 3, 1977, it was noted that upon completion, this third phase of development at Palm Springs Country Club would bring Harry Chaddick's total investment in construction projects within the city of Palm Springs to over $25 million dollars, and that this would be his seventeenth major construction project in the desert since his acquistion of the Palm Springs Tennis Club.

"A celebrity-studded ribbon cutting will mark the dedication Friday, Nov. 10, at 3 p.m., at Andreas Hills, when 26 luxury two and three bedroom condomiums and townhouses will be unveiled for public inspection.

Owner-developer Harry F. Chaddick made this announcement today, again expressing his enthusiasm and confidence in the future of Palm Springs. Chaddick is now constructing a three million dollar plus addition of 115 rooms at his Palm Springs Tennis Club.

‘‘The desert is experiencing a tremendous building boom and many are concerned” Chaddick said. “I am confident, however, there is always a market for elegance and excellence and there is only one Palm Springs. Architect William Cody is now designing our third phase at Andreas Hills.”

Andreas Hills condominiums start at $56,700. Two luxury custom homes in the $150,000 to $400,000 class are also under construction in the 700 acre South Palm Canyon development whose elevation ranges from 500 to 3,000 feet providing innumerable locations for hillside homes.

Illustrating Palm Springs nationwide reputation and appeal is the revelation by Andreas Hills Sales Director Jeri Lococo that 13 of the first 20 sales were out-of-California buyers.

Andreas Hills is a gold medallion development which will eventually include a skeet range in addition to the existing clubhouse, putting greens, riding trails and other leisure amenities."

"A new $5,000,000 condominium addition for the Andreas Hills development in Andreas Canyon has been announced by Harry F. Chaddick, Chicago and desert area developer.

Chaddick said the new project calls for construction of 42 new, luxurious condominium homes in the $90,000 to $150,000 class at Andreas Hills. The new addition combines Phases IV and V in the growing Andreas Hills colony which now consists of 90 condo units and 16 residential estates. 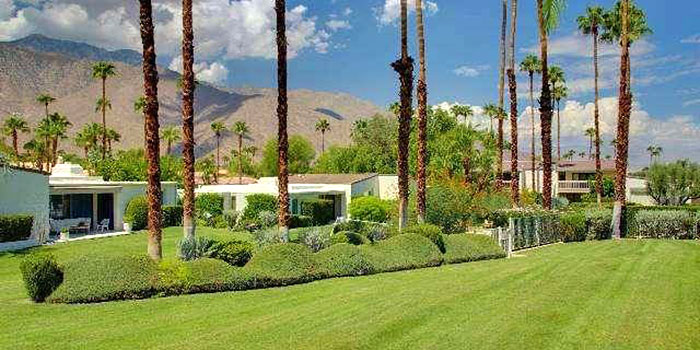 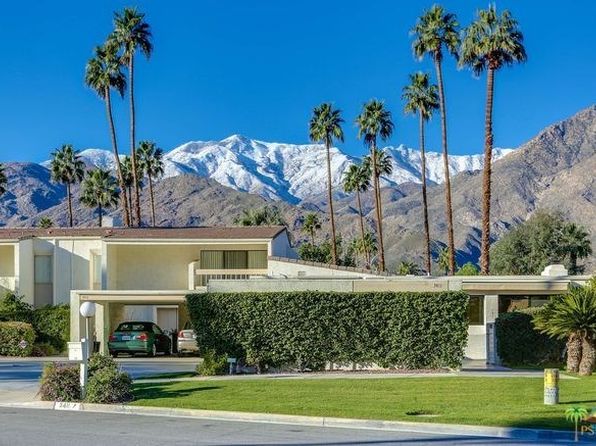 Chaddick said that due to an unusual sales spurt at Andreas Hills, no units are available until the new addition is completed, marking the first complete sell-out since the project started.

Only six weeks ago, Chaddick announced a new $2,000,000 expansion of his Palm Springs Country Club development, where 42 more condo units will be built.

Chaddick said that all but two of the lots in Phase 1 of the single family home development at Andreas Hills are sold and he is ready to launch Phase II in this subdivision.

Twenty-eight new home sites ranging from one half to one and one half acres are being offered in the $40,000 to $70,000 price range. All of the condominiums will be two and three bedroom onestories. A den in the three bedroom units may be converted into a fourth bedroom.

A new feature of the townhouse condos will be an upper level entrance into the living room, dining room and den, with bedrooms occupying the lower level. The lower level leads into a dry wash with a desert landscape patio area. The condo units will be of Mediterranean architecture designed by Palm Springs architect, Bernard K.K. Leung.

“This project will finish out the condominium areas on the lower slope of Andreas Hills,” Chaddick said. “The next development will be up in the mountains, where we have 600 acres yet to develop.”