One man who transformed nearly two square miles on the northern fringe of Palm Springs in the 1950s and 60s was developer Noel Clarke.

Clarke had originally been in the hospitality business, and had achieved phenomenal success as a developer of Walnut Estates, which was one of the first of the San Fernando Valley suburban housing developments, built on Clarke's significant land purchase from the Irvine estate, near Encino.

In Palm Springs, Clarke organized Ranch Club Enterprises, which was comprised of three different operations on nearly 1,000 acres. His complex included a 200-room hotel and resort complete with three swimming pools, tennis courts, riding stables, the Naughty 90’s and the Roundup Rooms for night life and an 18-hole golf course. The course was designed by club professional Joe Calwell, and included a man-made lake, drawing 2.5 million gallons daily from a 495-foot well. The golfing facilities were also a part of the Ranch Country Club, a private club with a beautiful clubhouse designed by local modernist architect, William Cody.

The third part of Clarke’s enterprise was a new real estate development which he called the Ranch Club Estates, built by his own construction company, the Ranch Construction Company.

In 1957, Ranch Construction Company foreman Tom Sills approached a young Hugh Kaptur to design the home plans. In the documentary Quiet Elegance: The Architecture of Hugh Kaptur, Kaptur remembers, “I filled the void for builders who didn’t want to spend thousands of dollars for plans. They were using draftsmen or building designers. I started doing work for contractors…that’s how I came to do houses out at Ranch Club Estates.” 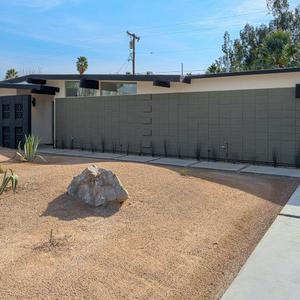 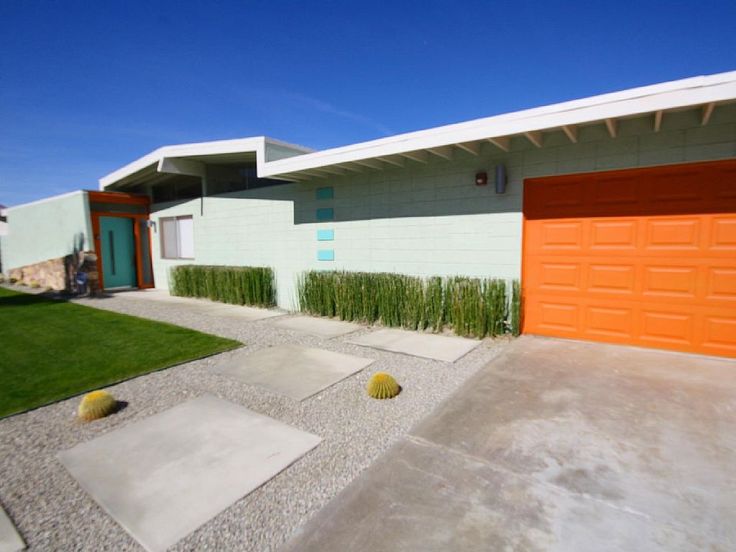 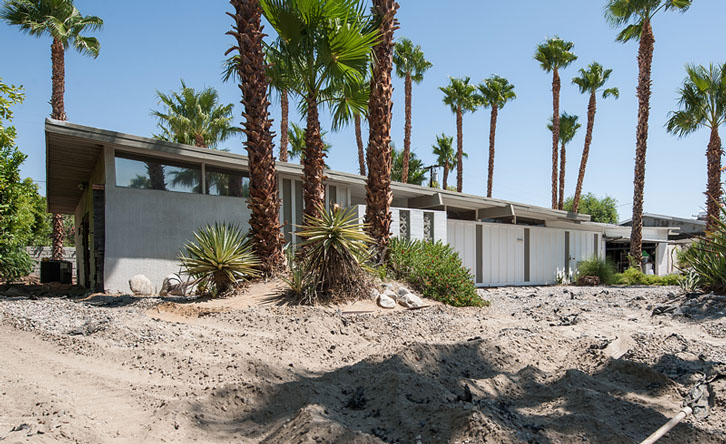 Five designs were created: the “Spur,” “Lariat,” “Saddle,” “Prairie,” and “Sombrero.” The mid-century modern designs abstracted features of adobe and indigenous architecture to create solid expressionistic forms with a variety of rooflines. The homes were noted for masonry elements at the center of the façade designed to, in Kaptur’s own words, “anchor the designs to the earth.”

An article in the Desert Sun, dated February 4, 1961, under the banner "Guided By Noel Clarke" was entitled "Ranch Club Grows Huge in Six Years":

"An incredble story of growth over a short six • year span has been amassed by the Palm Springs Ranch Club under the guidance ,of owner Noel Clarke. A revelation of the accomplishments Clarke has recorded during his direction of the Palm Springs landmark was the subject for review during the club's sixth anniversary party held recently in the club.

WHEN CLARKE TOOK over the Ranch Club, the facility consisted of nine hotel rooms, a dining room and some limited recreational pursuits. Clarke, in a manner not unlike that of a professional football coach, gathered about him a handpicked "team” capable of performing a specific assigned task. He obtained Arthur Robinson to manage his Ranch Club operation and Robinson in turn selected other persons to aid the Clarke enterprise.

TODAY, SIX YEARS later, the Ranch Club consists of: a greatly enlarged, completely renovated main hotel and dining room. A series of rental units dotted liberally over an acre of Ranch Club property. The Ranch Country Club, which centers about an 18-hole golf course, nine holes of which are now playable. A man-made lake draws from a 495-foot well which pumps a total of 2 million gallons daily. Beautifully trapped and greened, the course fronts before a modern clubhouse that includes a pro shop, dining room and soon a cocktail lounge. The Ranch Club Estates and Ranch Construction Company, allied operations which have already provided scores of distinctive, luxury homes, and which are now started on 259 more.

EVEN THE ORIGINAL edifice has undergone some striking changes.

Three swimming pools glorify the Ranch Club proper where only one such recreational facility was evident six years ago. A completely renovated series of tennis courts offer court enthusiasts some of the livest play available here in Palm Springs. The Ranch Club's famed stables, where the crack riders of American society mount up along with show business personalities and Palm Springs' own distinguished citizenry, still maintains the flavor of the Old West.

In the clubhouse, an enlarged dining-room with dining terrace handle a maximum of dining needs. And the club Corral Room and new Naughty Nineties Room cater to the club-going crowd. (The Nineties is a Clarke brainchild, complete with nickle sandwiches, velvet and bead decor, honkey-tonk piano, and scantily clad barmaids.)

CLARKE'S CHOICE of personnel hasn't altered in the six years he's operated the Ranch Club facilities. In addition to Robinson, he's acquired the services of such as:

CLARKE'S PLAN? Mere of the same in the next six years "We've seen the Ranch Club's potential vividly illustrated here in the past several years.” he said. “We feel that this potential is only now beginning to be tapped.”

With the handwriting on the wall, so to speak the Ranch Club can point to an illustrious past as the indication cf even greater things to come."

In the May 1961 edition of Palm Springs Life, Clarke was again quoted talking about what he saw as the future of his project and he said, “The potential of Ranch Club Enterprises has only been brought to light during the past six years. We feel this is merely the beginning.”

But the Ranch Construction Company went bankrupt, and only about 250 homes were built. Instead of building the homes in clusters and creating neighborhoods, the homes were built “scattershot” around the development in hopes that it would increase the value of the land between.

Unfortunately, this was not a successful strategy, and the rest of the Ranch Club project ultimately proved unsustainable. After Clarke died (of a heart attack, following a year-long illness) in February 1964, and his Ranch Construction Company had folded, in 1965, Clarke's widow sold the Ranch Club, itself, in 1967.

By the early 1970s, the Ranch Club was closed. It was torn down shortly after - except for one remaining building that sits just off Sunrise Way, immediately south of the Desert AIDS project, that has been converted to house offices for small businesses.

The golf course - renamed Whitewater Country Club when acquired by developer Harry Chaddick in 1970, and again as the Palm Springs Country Club, in 1976 - closed for good in September 2006. It subsequently fell into such disrepair that the city of Palm Springs filed a lawsuit, naming the owners - a private investor group that had acquired it in default - as defendants. The often-remodeled, often-expanded clubhouse was finally demolished in June 2011.

Today, all that is left of the Ranch Club is a wall along the west side of Sunrise Way, just south of Vista Chino - at the northeast corner of the Ranch Club Estados condominium development - with letters spelling out the words "RANCH CLUB" and behind it, at the end of a short divided drive, a two story building that now houses offices, and a pharmacy.

The only other Noel Clarke legacy is the more than 250 Ranch Club Estates homes, designed by Hugh Kaptur and built by Ranch Construction Company, in the neighborhood now generally known as Desert Park Estates, which includes streets named after Clarke’s wife - Joyce - and their three daughters: Nicole, Sandra and Deborah. 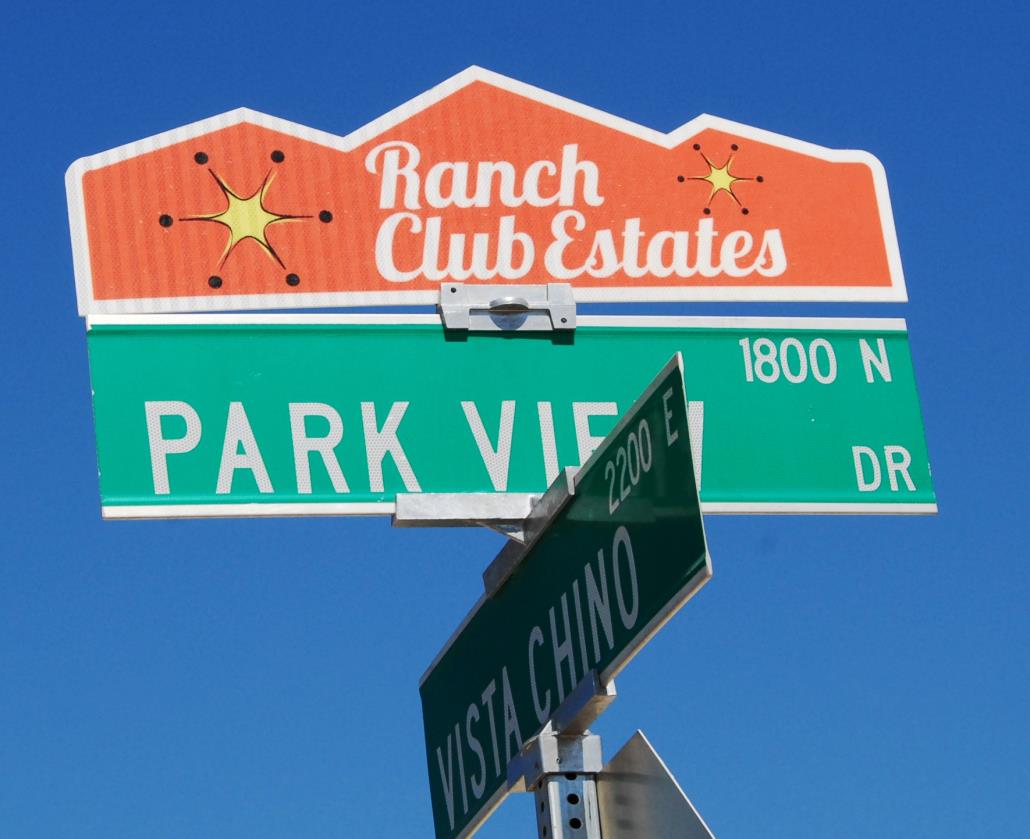 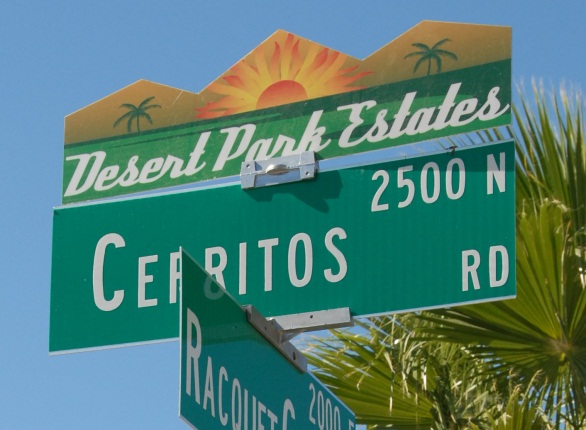