Charles Ormond Eames, Jr (1907–1978) and Bernice Alexandra "Ray" (née Kaiser) Eames (1912–1988) /ˈiːmz/ were husband and wife American designers who made significant historical contributions to the development of modern architecture and furniture. Among their most well-known designs is the Eames Lounge Chair. They also worked in the fields of industrial and graphic design, fine art and film.

Charles Ormond Eames, Jr, (June 17, 1907 – August 21, 1978) was an American designer, architect and film maker. Along with his wife Ray Kaiser Eames he is responsible for groundbreaking contributions in the field of architecture, furniture design, industrial design, manufacturing and the photographic arts.

He briefly studied architecture at Washington University in St. Louis on an architecture scholarship. After two years of study, he left the university. Many sources claim that he was dismissed for his advocacy of Frank Lloyd Wright and his interest in modern architects. The university reportedly dropped him because of his "too modern" views.[1] Other sources, less frequently cited, note that while a student, Charles Eames also was employed as an architect at the firm of Trueblood and Graf.[2] The demands on his time from this employment and from his classes led to sleep-deprivation and diminished performance at the university.

While at Washington University, he met his first wife, Catherine Woermann, whom he married in 1929. A year later, they had a daughter, Lucia Jenkins.

In 1930, Charles began his own architectural practice in St. Louis with partner Charles Gray. They were later joined by a third partner, Walter Pauley.

Charles Eames was greatly influenced by the Finnish architect Eliel Saarinen (whose son Eero Saarinen, also an architect, would become a partner and friend). At the elder Saarinen's invitation, Charles moved in 1938 with his wife Catherine and daughter Lucia to Michigan, to further study architecture at the Cranbrook Academy of Art, where he would become a teacher and head of the industrial design department. In order to apply for the Architecture and Urban Planning Program, Eames defined an area of focus—the St. Louis waterfront. Together with Eero Saarinen he designed prize-winning furniture for New York's Museum of Modern Art "Organic Design in Home Furnishings" competition.[3] Their work displayed the new technique of wood moulding (originally developed by Alvar Aalto), that Eames would further develop in many moulded plywood products, including chairs and other furniture, splints and stretchers for the US Navy during World War II.[4]

In 1941, Charles and Catherine divorced, and he married his Cranbrook colleague Bernice ("Ray") Kaiser, who was born in Sacramento, California. He then moved with her to Los Angeles, California, where they worked and lived until their deaths. In the late 1940s, as part of the Arts & Architecture magazine's "Case Study" program, the Eames designed and built the groundbreaking Eames House, Case Study House #8, as their home. Located upon a cliff overlooking the Pacific Ocean and hand-constructed within a matter of days entirely of pre-fabricated steel parts intended for industrial construction, it remains a milestone of modern architecture. 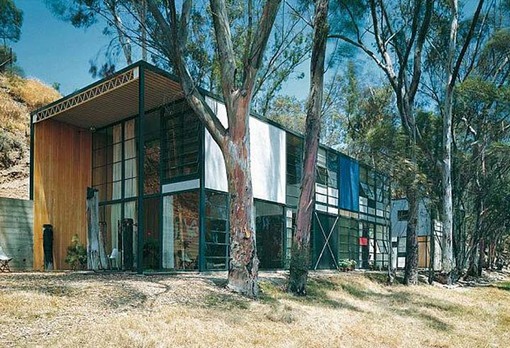 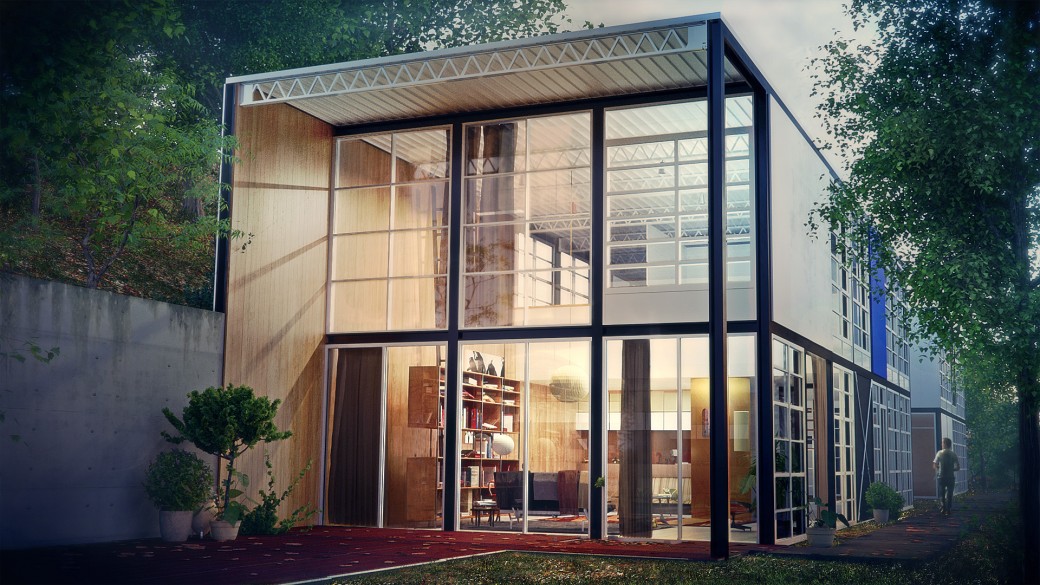 Charles Eames died of a heart attack on August 21, 1978 while on a consulting trip in his native Saint Louis, and was buried in the Calvary Cemetery there. He now has a star on the St. Louis Walk of Fame.[5]

In 1970 and 1971, Charles Eames gave the Charles Eliot Norton Lectures at Harvard University. At the lectures, the Eames viewpoint and philosophy are related through Charles' own telling of what he called "the banana leaf parable", a banana leaf being the most basic eating utensil in southern India. He related the progression of design and its process where the banana leaf is transformed into something fantastically ornate. He explains the next step and ties it to the design process by finishing the parable with:

But you can go beyond that and the guys that have not only means, but a certain amount of knowledge and understanding, go the next step and they eat off of a banana leaf. And I think that in these times when we fall back and regroup, that somehow or other, the banana leaf parable sort of got to get working there, because I'm not prepared to say that the banana leaf that one eats off of is the same as the other eats off of, but it's that process that has happened within the man that changes the banana leaf. And as we attack these problems—and I hope and I expect that the total amount of energy used in this world is going to go from high to medium to a little bit lower—the banana leaf idea might have a great part in it.[6]

Ray - Bernice Alexandra Kaiser Eames (December 15, 1912 – August 21, 1988) - was an American artist, designer, and filmmaker. Along with her husband Charles Eames she is responsible for groundbreaking contributions in the field of architecture, furniture design, industrial design, manufacturing and the photographic arts.[7] She was born in Sacramento, California to Alexander and Edna Burr Kaiser, and had a brother named Maurice. She spent her early childhood years with her parents in their apartment, and then moved to a bungalow outside of the town. Her parents taught her the quality of enjoyment which later led to inventions in furniture design and toys. Her parents also instilled the value of enjoyment of nature.[8] After having lived in a number of cities during her youth and after her father's death, in 1933 she graduated from Bennett Women's College in Millbrook, New York, and moved to New York City, where she studied abstract expressionist painting with Hans Hofmann. She was a founder of the American Abstract Artists group in 1936 and displayed paintings in their first show a year later in 1937 at Riverside Museum in Manhattan.[9] One of her paintings is in the permanent collection of The Whitney Museum of American Art. Ray lived alone in New York City until she was called home to be with her ailing mother, who died in 1940.

In September 1940, Ben Baldwin, an architect and friend, recommended she begin studies at the Cranbrook Academy of Art in Bloomfield Hills, Michigan. She learned a variety of arts, not limiting herself to abstract painting. She worked with Harry Bertoia, Eero Saarinen, Charles Eames and others on the display panels for the exhibition "Organic Design in Home Furnishings" at Museum of Modern Art.[10] Ray married Charles Eames in 1941.[11] Settling in Los Angeles, California, Charles and Ray Eames began an outstanding career in design and architecture.

The design process between Ray and Charles was strongly collaborative. After marriage the couple moved to California to continue their molded plywood furniture design and, in a later period, plastic. The graphic and commercial artwork can be clearly attributed to Ray, she designed twenty-six cover designs for the journal Arts & Architecture during 1942 to 1948, and a major part of the Eames furniture advertisements at Herman Miller (since 1948).[10]

In the late 1940s, Ray Eames created several textile designs, two of which, "Crosspatch" and "Sea Things", were produced by Schiffer Prints, a company that also produced textiles by Salvador Dalí and Frank Lloyd Wright.[12] Two of her textile patterns were distinguished with awards in a textile competition (organized by MoMa). She worked on graphics for advertising, magazine covers, posters, timelines, game boards, invitations and business cards. Original examples of Ray Eames textiles can be found in many art museum collections. The Ray Eames textiles have been re-issued by Maharam as part of their Textiles of the Twentieth Century collection.

After Charles's death in 1978, the Eames Office was disbanded. Ray Eames worked on several unfinished projects (e.g. a German version of the Mathematica exhibition), was a consultant to IBM, published books, and administered the Eames archive and estate.[10]

Ray Eames died in Los Angeles in 1988, ten years to the day after Charles. They are buried next to each other in Calvary Cemetery in St. Louis.

Ray Eames had a joyful and rigorous work ethic at the Eames Office. She called it the "shop"- a place where they worked and did early production work. At the office, they employed local people, war veterans, and housewives. Eames office was a diversified workplace. The Eameses also believed in "learning by doing"- before introducing a new idea at the Eames Office, Charles and Ray explored the needs and constraints of the idea extensively.

I never gave up painting, I just changed my palette.[13]

In the 1950s, the Eameses continued their work in architecture and modern furniture design. As with their earlier molded plywood work, the Eameses pioneered technologies, such as fiberglass furniture, plastic resin chairs, and the wire mesh chairs designed for Herman Miller. From the beginning, the Eames furniture has usually been listed as by Charles Eames.

In the 1948 and 1952 Herman Miller bound catalogs, only Charles' name is listed, but it has become clear that Ray was deeply involved and was an equal partner with her husband in many projects.

In August 2005 Maharam fabrics reissued Eames designed fabrics; Sea Things (1947) pattern and Dot Pattern.[14][15] Dot Pattern was conceived for The Museum of Modern Art’s “Competition for Printed Fabrics” in 1947. The Eames fabrics were mostly designed by Ray, as were the Time-Life Stools.

In 1979, the Royal Institute of British Architects awarded Charles and Ray with the Royal Gold Medal. At the time of Charles' death they were working on what became their last production, the Eames Sofa, which went into production in 1984.

Charles and Ray channeled Charles' interest in photography into the production of 125 short films. From their first film, the unfinished Traveling Boy (1950), to Powers of Ten (re-released in 1977), to their last film in 1982,[16] their cinematic work was an outlet for ideas, a vehicle for experimentation and education. The couple often produced short films in order to document their interests, such as collecting toys and cultural artifacts on their travels. The films also record the process of hanging their exhibits or producing classic furniture designs. Some of their other films cover more intellectual topics. For example, one film covers the purposely mundane topic of filming soap suds moving over the pavement of a parking lot. Powers of Ten (narrated by physicist Philip Morrison), gives a dramatic demonstration of orders of magnitude by visually zooming away from the earth to the edge of the universe, and then microscopically zooming into the nucleus of a carbon atom.

The Eameses also conceived and designed a number of exhibitions. The first of these, Mathematica: A World of Numbers...and Beyond (1961), was sponsored by IBM, and is the only one of their exhibitions still extant.[17] The Mathematica exhibition is still considered a model for science popularization exhibitions. It was followed by A Computer Perspective: Background to the Computer Age (1971) and The World of Franklin and Jefferson (1975–1977), among others.

Eames products were also manufactured on Washington Boulevard until the 1950s.[18] Among the many important designs originating there are the molded-plywood DCW (Dining Chair Wood) and DCM (Dining Chair Metal with a plywood seat) (1945); Eames Lounge Chair (1956); the Aluminum Group furniture (1958); the Eames Chaise (1968), designed for Charles's friend, film director Billy Wilder;[21] the playful Do-Nothing Machine (1957), an early solar energy experiment; and a number of toys.

Not limiting themselves to furniture design, Ray and Charles developed a leg splint using the material they had for the furniture in the guest bedroom of their apartment. With the introduction of plywood splints, they were able to replace problematic metal traction splints that had side effects of inducing gangrene due to impairment of blood circulation.

A documentary about the couple titled Eames: The Architect and the Painter was released on November 18, 2011 as part of the American Masters series on PBS television and on YouTube from PBS as Cd1[26] and Cd2.[27] 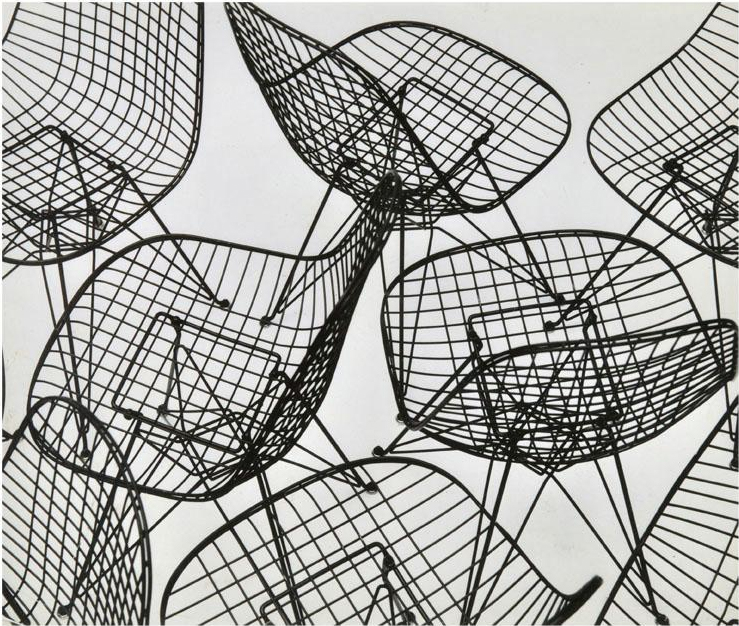 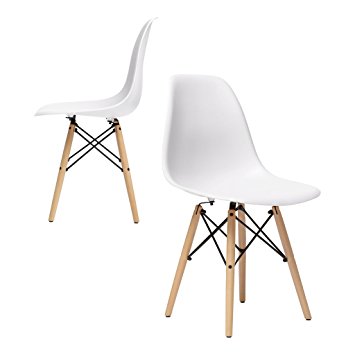